Think tank based in Washington, D.C., US

The Pew Research Center is a nonpartisan American think tank (referring to itself as a "fact tank") based in Washington, D.C.

The Pew Research Center does not take policy positions, and is a subsidiary of The Pew Charitable Trusts.[4][5]

In 1990, the Times Mirror Company founded the Times Mirror Center for the People & the Press as a research project, tasked with conducting polls on politics and policy. Andrew Kohut became its director in 1993, and The Pew Charitable Trusts became its primary sponsor in 1996, when it was renamed the Pew Research Center for the People & the Press.[6]

The Pew Research Center is a nonprofit, tax-exempt 501(c)(3) organization and a subsidiary of The Pew Charitable Trusts, its primary funder.[5][9] For its studies focusing on demographics of religions in the world, the Pew Research Center has been jointly funded by the Templeton Foundation.[10][11] 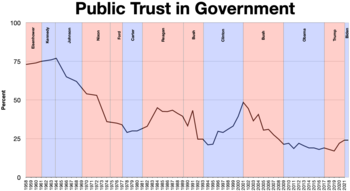 Researchers at the Pew Research Center annually comb through publicly available sources of information and publications.[13][14] The Pew Research Center released its 10th annual report on Global Restrictions on Religion as part of the Pew-Templeton Global Religious Futures project, funded by The Pew Charitable Trusts and the John Templeton Foundation. The annual report looked at events that took place about 18 months to two years before its publication. While the previous reports focused on year-over-year change, this report provides a broader look at the trend in particular regions and in 198 countries and territories. The report documents how government restrictions on religion and social hostilities involving religion have changed and increased, from 2007 to 2017. It said 52 governments impose high levels of restrictions on religion, up from 40 in 2007, while 56 countries experienced the highest levels of social hostilities involving religion, up from 38 in 2007. According to the report, laws and policies restricting religious freedom and government favoritism of religious groups are the two types of restrictions that have been the most prevalent. The trends suggest that religious restrictions have been rising around the world but not so evenly across all geographic regions or all kinds of restrictions.[15][16]