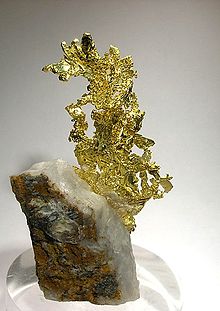 Gold specimen from the Eagle's Nest Mine, a source of specimen gold in Placer County

Placer County is included in the Greater Sacramento metropolitan area. It is in both the Sacramento Valley and Sierra Nevada regions, in what is known as the Gold Country. The county stretches roughly 65 miles from Sacramento's suburbs at Roseville to the Nevada border and the shore of Lake Tahoe.

The discovery of gold in 1848 brought tens of thousands of miners from around the world during the California Gold Rush. In addition, many more thousands came to provide goods and services to the miners. On April 25, 1851, the fast-growing county was formed from parts of Sutter and Yuba Counties with Auburn as the county seat. Placer County took its name from the Spanish word for sand or gravel deposits containing gold. Miners washed away the gravel, leaving the heavier gold, in a process known as "placer mining".

Gold mining was a major industry through the 1880s, but gradually the new residents turned to farming the fertile foothill soil, harvesting timber and working for the Southern Pacific Railroad. Auburn was settled when Claude Chana discovered gold in Auburn Ravine in May 1848 and later became a shipping and supply center for the surrounding gold camps. The cornerstone of Placer's courthouse, which is clearly visible from Interstate 80 through Auburn, was laid on July 4, 1894. The building was renovated during the late 1980s and continues to serve the public with courtrooms, a sheriff's office and the Placer County Museum. Roseville, once a small agricultural center, became a major railroad center and grew to the county's most populous city after Southern Pacific Railroad moved its railroad switching yards there in 1908.

Loomis and Newcastle began as mining towns, but soon became centers of a booming fruit-growing industry, supporting many local packing houses. Penryn was founded by a Welsh miner, Griffith Griffith, who established a large granite quarry. Rocklin began as a railroad town and became home to a number of granite quarries. Lincoln and Sheridan continue to support ranching and farming. Lincoln also is the home of one of the county's oldest businesses, the Gladding, McBean terra cotta clay manufacturing plant, established in 1875.

The 1960 Winter Olympics were hosted in Squaw Valley, in Placer County.

County government is by a five-person four-year term elected board of supervisors with a board-appointed county manager and his/her department administrators.

The Placer County Sheriff's Office provides court protection, jail administration, and coroner services for all of Placer County. It provides patrol, detective, and other police services for the unincorporated areas of the county plus by contract to the city of Colfax and the town of Loomis.

In its early history Placer County was solidly Republican: it voted Republican in every election between 1860 and 1912, when Bull Moose nominee Theodore Roosevelt was California's official Republican nominee.[25] Between 1916 and 1976, however, the county voted Republican only in three landslide elections of 1920, 1952 and 1972 – in all of which its GOP margins were much smaller than for the state or nation. Since the “Reagan Revolution” Placer County has become and remained a stronghold of the Republican Party; it consistently elects Republican public officials and has voted for presidential candidates from the party in every election since 1980.

In the California State Senate, Placer County is split between the 1st and 4th districts,[29] represented by Brian Dahle and Jim Nielsen, respectively.

In the California State Assembly, the county is split between the 1st, 5th, and 6th districts,[30] represented by Megan Dahle, Frank Bigelow, and Kevin Kiley, respectively.

According to the county's 2010 Comprehensive Annual Financial Report,[34] the top employers in the county are:

mPOWER Placer is Placer County's Property Assessed Clean Energy (PACE) program. It provides financing to commercial, industrial, agricultural and multifamily property owners to install energy efficiency, water conservation and renewable energy retrofits. The program, administered by the Placer County Treasurer-Tax Collector’s Office, was approved by the Board of Supervisors on February 9, 2010, and launched on March 22, 2010, and is open to eligible Placer County property owners.

There are three general aviation airports in Placer County:

The closest commercial airport is Sacramento International Airport in Sacramento.

The population ranking of the following table is based on the 2020 census of Placer County.[35]