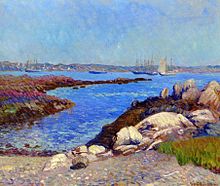 Portsmouth is a city in Rockingham County, New Hampshire, United States. As of the 2020 census it had a population of 21,956.[2] A historic seaport and popular summer tourist destination on the Piscataqua River bordering the state of Maine, Portsmouth was formerly the home of the Strategic Air Command's Pease Air Force Base, since converted to Portsmouth International Airport at Pease.

American Indians of the Abenaki and other Algonquian languages-speaking nations, and their predecessors, inhabited the territory of coastal New Hampshire for thousands of years before European contact.

The first known European to explore and write about the area was Martin Pring in 1603. The Piscataqua River is a tidal estuary with a swift current, but forms a good natural harbor. The west bank of the harbor was settled by European colonists in 1630 and named Strawbery Banke, after the many wild strawberries growing there. The village was protected by Fort William and Mary on what is now New Castle Island. Strategically located for trade between upstream industries and mercantile interests abroad, the port prospered. Fishing, lumber and shipbuilding were principal businesses of the region.[3] Enslaved Africans were imported as laborers as early as 1645 and were integral to building the city's prosperity.[4] Portsmouth was part of the Triangle Trade, which made significant profits from slavery.

At the town's incorporation in 1653, it was named "Portsmouth" in honor of the colony's founder, John Mason. He had been captain of the English port of Portsmouth, Hampshire, after which New Hampshire is named.

When Queen Anne's War ended in 1712, Governor Joseph Dudley selected the town to host negotiations for the 1713 Treaty of Portsmouth, which temporarily ended hostilities between the Abenaki Indians and the colonies of Massachusetts Bay and New Hampshire.[3]

In 1774, in the lead-up to the Revolution, Paul Revere rode to Portsmouth warning that the British Royal Navy was coming to capture the port.[5] Although Fort William and Mary protected the harbor, the Patriot government moved the capital inland to Exeter, which ensured that it would be under no threat from the Royal Navy, which bombarded Falmouth (now Portland, Maine) instead on October 18, 1775. Portsmouth was the destination for several of Beaumarchais's ships containing materiel, such as artillery, tents, and gunpowder, to help the American revolutionary effort.[6] African Americans helped defend Portsmouth and New England during the war. In 1779, 19 enslaved African Americans from Portsmouth wrote a petition to the state legislature and asked that it abolish slavery, in recognition of their war contributions and in keeping with the principles of the Revolution.[4] Their petition was not answered, but New Hampshire later abolished slavery.

Thomas Jefferson's 1807 embargo against American trade with Britain severely disrupted New England's trade with Canada, and several local businessmen went bankrupt. Portsmouth was host to numerous privateers during the War of 1812. In 1849, Portsmouth was incorporated as a city.[3]

Once one of the nation's busiest ports and shipbuilding cities, Portsmouth expressed its wealth in fine architecture. It has significant examples of Colonial, Georgian, and Federal style houses, some of which are now museums. Portsmouth's heart has stately brick Federalist stores and townhouses, built all-of-a-piece after devastating early 19th-century fires. The worst was in 1813 when 244 buildings burned.[3] A fire district was created that required all new buildings within its boundaries to be built of brick with slate roofs; this created the downtown's distinctive appearance. The city was also noted for the production of boldly wood-veneered Federalist furniture, particularly by the master cabinet maker Langley Boardman.

The Industrial Revolution spurred economic growth in New Hampshire mill towns such as Dover, Keene, Laconia, Manchester, Nashua and Rochester, where rivers provided water power for the mills. It shifted growth to the new mill towns. The port of Portsmouth declined, but the city survived Victorian-era doldrums, a time described in the works of Thomas Bailey Aldrich, particularly in his 1869 novel The Story of a Bad Boy.

In the 20th century, the city founded a Historic District Commission, which has worked to protect much of the city's irreplaceable architectural legacy. In 2008, the National Trust for Historic Preservation named Portsmouth one of the "Dozen Distinctive Destinations".[7] The compact and walkable downtown on the waterfront draws tourists and artists, who each summer throng the cafes, restaurants and shops around Market Square. Portsmouth annually celebrates the revitalization of its downtown (in particular Market Square) with Market Square Day,[8] a celebration dating back to 1977, produced by the non-profit Pro Portsmouth, Inc.

Portsmouth shipbuilding history has had a long symbiotic relationship with Kittery, Maine, across the Piscataqua River. In 1781–1782, the naval hero John Paul Jones lived in Portsmouth while he supervised construction of his ship Ranger, which was built on nearby Badger's Island in Kittery. During that time, he boarded at the Captain Gregory Purcell house, which now bears Jones' name, as it is the only surviving property in the United States associated with him. Built by the master housewright Hopestill Cheswell, an African American,[9] it has been designated as a National Historic Landmark. It now serves as the Portsmouth Historical Society Museum.

The Portsmouth Naval Shipyard, established in 1800 as the first federal navy yard, is on Seavey's Island in Kittery, Maine.[10] The base is famous for being the site of the 1905 signing of the Treaty of Portsmouth[11] which ended the Russo-Japanese War. Though US President Theodore Roosevelt orchestrated the peace conference that brought Russian and Japanese diplomats to Portsmouth and the Shipyard, he never came to Portsmouth, relying on the Navy and people of New Hampshire as the hosts. Roosevelt won the 1906 Nobel Peace Prize for his diplomacy in bringing about an end to the War.

Portsmouth downtown from I-95

According to the United States Census Bureau, the city has a total area of 16.8 square miles (43.6 km2), of which 15.7 square miles (40.6 km2) are land and 1.2 square miles (3.0 km2), or 6.92%, are water.[1] Portsmouth is drained by Berrys Brook, Sagamore Creek and the Piscataqua River, which is the boundary between New Hampshire and Maine. The highest point in the city is 110 feet (34 m) above sea level, within Pease International Airport.

Portsmouth has a humid continental climate[12] (Dfb) in spite of its maritime position, due to prevailing inland winds. Summers are moderately warm with winter days averaging around the freezing point, but with cold nights bringing it below the required −3 °C (27 °F) isotherm to have a humid continental climate. With high year-round precipitation, the cold winters can often be very snowy and summers wet.[13]

Portsmouth is the sole city in Rockingham County, but the fourth-largest municipality, with fewer people than the towns of Derry, Londonderry, and Salem.

The city of Portsmouth operates under a council-manager system of government. Portsmouth elects a nine-member at-large City Council to serve as the city's primary legislative body.[19] The candidate who receives the most votes is designated the Mayor (currently Deaglan McEachern), while the candidate receiving the second-highest vote total is designated the Assistant Mayor (currently Joanna Kelley). While the mayor and council convene to establish municipal policy, the City Manager (currently Karen Conard) oversees the city's day-to-day operations.[20]

In March 2014, Portsmouth became the first municipality in New Hampshire to implement protections for city employees from discrimination on the basis of gender identity, by a 9–0 vote of the city council.[26]

Historic North Church, a United Church of Christ congregation in downtown Portsmouth; the steeple is visible throughout the community. 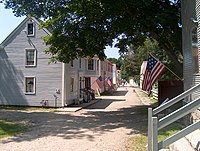 Heinemann USA is based in Portsmouth. Before its dissolution, Boston-Maine Airways (Pan Am Clipper Connection), a regional airline, was also headquartered in Portsmouth.[35] Companies with headquarters in Portsmouth include packaged software producer Bottomline Technologies and frozen yogurt maker Sweet Scoops.

According to the city's 2020 Comprehensive Annual Financial Report,[36] the top ten employers in the city are: 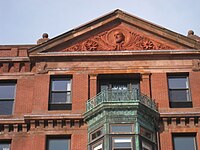 Former Rockingham Hotel, rebuilt in 1885 by Frank Jones after the original structure burned

See also: List of newspapers in New Hampshire in the 18th century: Portsmouth

The Seacoast United Phantoms are a soccer team based in Portsmouth. Founded in 1996, the team plays in the Northeast Division of USL League Two (USL2), one of the unofficial fourth tier leagues of the American Soccer Pyramid.

Portsmouth also has friendly relations with:[37]