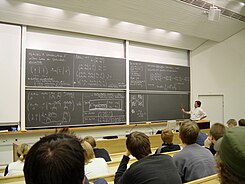 Students attend a lecture at a tertiary institution: Helsinki University of Technology

Tertiary education generally culminates in the receipt of certificates, diplomas, or academic degrees.

The World Bank's 2019 World Development Report on the future of work[3] argues that given the future of work and the increasing role of technology in value chains, tertiary education becomes even more relevant for workers to compete in the labor market. 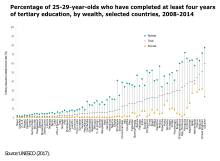 Percentage of 25-29-year-olds who have completed at least four years of tertiary education, by wealth, selected countries, 2008-2014

Between now and 2030, the biggest increase in tertiary enrolment ratios is expected in middle-income countries, where it will reach 52%. Sustainable Development Goal 4 (SDG 4) commits countries to providing lifelong learning opportunities for all, including tertiary education.[4]

This commitment is monitored through the global indicator for target 4.3 in the sustainable development goal 4 (SDG 4), which measures the participation rate of youth and adults in formal and non-formal education and training in the previous 12 months, whether for work or non-work purposes.[4]

In 1994 the UNESCO Salamanca Statement called on the international community to endorse the approach of inclusive education, including at the tertiary level. Since this time the world has witnessed the global massification of tertiary education, yet this explosion of facilities and enrollment has largely entrenched and exacerbated the exclusion of people with disabilities. This is particularly the case in low- and middle-income contexts, where university completion rates for students with disabilities are much lower compared to completion rates of students without disabilities. [5]

Some tertiary schools have been criticized as having permitted or actively encouraged grade inflation.[6][7] In addition, certain scholars contend that the supply of graduates in some fields of study is exceeding the demand for their skills, aggravating graduate unemployment, underemployment and credentialism.[8][9]

In the United Kingdom

Under devolution in the United Kingdom, education is administered separately in England, Wales, Northern Ireland, and Scotland. In England, the term "tertiary education" aligns with the global term "higher education" (i.e. post-18 study).[11] In 2018 the Welsh Government adopted the term "tertiary education" to refer to post-16 education and training in Wales.[12] Since the 1970s, however, specialized further education colleges in England and Wales have called themselves "tertiary colleges" although being part of the secondary education process. These institutions cater for both school leavers and adults, thus combining the main functions of an FE college and a sixth form college.[13] Generally, district councils with such colleges have adopted a tertiary system or structure where a single local institution provides all the 16–19 and adult education, and where schools do not universally offer sixth forms (i.e. schools only serve ages 11–16). However the Further and Higher Education Act 1992 has effectively prevented the creation of new tertiary colleges.[14]

Deakin University, one of Australia's 43 universities

In the United States of America

The University of Pennsylvania, an American research university

The higher education system in the United States is decentralized and regulated independently by each state[15] with accreditors playing a key role in ensuring institutions meet minimum standards. It is large and diverse with institutions that are privately governed and institutions that are owned and operated by state and local governments. Some private institutions are affiliated with religious organizations whereas others are secular with enrollment ranging from a few dozen to tens of thousands of students. In short, there are a wide variety of options which are often locally determined. The United States Department of Education presents a broad-spectrum view of tertiary education and detailed information on the nation's educational structure, accreditation procedures, and connections to state as well as federal agencies and entities.[16]

In the European Union

Although tertiary education in the EU includes university, it can differ from country to country. 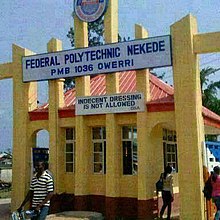 Tertiary education refers to post-secondary education received at universities (government or privately funded), monotechnics, polytechnics and colleges of education. After completing a secondary education, students may enroll in a tertiary institution or acquire a vocational education. Students are required to sit for the Joint Admissions and Matriculation Board Entrance Examination (JAMB) as well as the Secondary School Certificate Examination (SSCE) or General Certificate Examination (GCE) and meet varying cut-off marks to gain admission into a tertiary institution.[20]

4th and 5th grades of colleges of technology and special training colleges fall into the category.

Whilst special training colleges are not "schools" by the law, they are schools in public view. Their most courses are for two years but some have one, three or four-year courses. Graduates from courses for more than two years are equivalent to graduates from junior colleges and graduates from a course for four years can enter a graduate course of a university in recent years.

History of the special training schools

Special training schools were included in miscellaneous schools by the current educational law when it was enforced in 1947. The 83th article of the law provided for them and they were certainly miscellaneous.

There were various styles whilst the law authorised: for example, schools to provide about educational backgrounds and those without any provisions about them. There are still many problems and special training schools were created in January 1976. They include three courses: post-secondary, upper-secondary, and general courses. Schools with the post-secondary course for graduates who finish senior high schools and people with equivalent educational backgrounds are called as special training colleges. The upper-secondary course is that for graduates from junior high schools and everyone can enter the general course. The latter is near current miscellaneous schools.

Graduates from special training colleges since 1994 can get diploma. The law does not provide about diploma unlike foundation degree that graduates from colleges of technology can get but is public degree as well.

This article incorporates text from a free content work. Licensed under CC BY-SA 3.0 IGO Text taken from #CommitToEducation, 35, UNESCO, UNESCO. UNESCO. To learn how to add open license text to Wikipedia articles, please see this how-to page. For information on reusing text from Wikipedia, please see the terms of use.