Registered charity in the UK

The creation of a British horticultural society was suggested by John Wedgwood (son of Josiah Wedgwood) in 1800. His aims were fairly modest: he wanted to hold regular meetings, allowing the society's members the opportunity to present papers on their horticultural activities and discoveries, to encourage discussion of them, and to publish the results. The society would also award prizes for gardening achievements.

Wedgwood discussed the idea with his friends, but it was four years before the first meeting, of seven men, took place, on 7 March 1804 at Hatchards bookshop in Piccadilly, London. Wedgwood was chairman; also present were William Townsend Aiton (successor to his father, William Aiton, as Superintendent of Kew Gardens), Sir Joseph Banks (President of the Royal Society), James Dickson (a nurseryman), William Forsyth (Superintendent of the gardens of St. James's Palace and Kensington Palace), Charles Francis Greville (a Lord of the Admiralty) and Richard Anthony Salisbury, who became the Secretary of the new society.[6]

Banks proposed his friend Thomas Andrew Knight for membership. The proposal was accepted, despite Knight's ongoing feud with Forsyth over a plaster for healing tree wounds which Forsyth was developing. Knight was president of the society from 1811 to 1838, and developed the society's aims and objectives to include a programme of practical research into fruit-breeding.[citation needed]

Members and Fellows of the Royal Horticultural Society are entitled to use the post-nominal letters MRHS[10] and FRHS, respectively.[11] 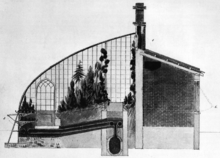 The society's first garden was in Kensington, from 1818 to 1822. In 1820 the society leased some of Hugh Ronalds' nursery ground at Little Ealing to set up an experimental garden,[17] but the next year part of the Duke of Devonshire's estate at Chiswick was obtained. In 1823 it employed Joseph Paxton there. From 1827 the society held fêtes at the Chiswick garden, and from 1833, shows with competitive classes for flowers and vegetables. In 1861 the RHS (as it had now become) developed a new garden at South Kensington on land leased from the Royal Commission for the Exhibition of 1851 (the Science Museum, Imperial College and the Royal College of Music now occupy the site), but it was closed in 1882.[18] The Chiswick garden was maintained until 1903–1904, by which time Sir Thomas Hanbury had bought the garden at Wisley and presented it to the RHS.

RHS Garden Wisley is thus the society's oldest garden. Rosemoor came next, presented by Lady Anne Berry in 1988. Hyde Hall was given to the RHS in 1993 by its owners Dick and Helen Robinson. Dick Robinson was also the owner of the Harry Smith Collection which was based at Hyde Hall. The most recent addition is Harlow Carr, acquired by the merger of the Northern Horticultural Society with the RHS in 2001. It had been the Northern Horticultural Society's trial ground and display garden since they bought it in 1949. In 2013, more than 1.63 million people visited the four gardens.[1]

In 2015, the RHS announced plans for a fifth garden at Worsley New Hall, Greater Manchester, under the name RHS Garden Bridgewater.[19]

The RHS is well known for its annual flower shows which take place across the UK. The most famous of these shows is the RHS Chelsea Flower Show, visited by people from across world. This is followed by the Hampton Court Palace Flower Show (which the RHS took over in 1993) and RHS Tatton Park Flower Show in Cheshire (since 1999).[20]

The most recent addition to the RHS shows line-up is the RHS Show Cardiff, held at Cardiff Castle since 2005.[21] The society is also closely involved with the spring and autumn shows at Malvern, Worcestershire, and with BBC Gardeners' World Live held annually at the Birmingham National Exhibition Centre.

The RHS is custodian of the Lindley Library, housed within its headquarters at 80 Vincent Square, London, and in branches at each of its four gardens. The library is based upon the book collection of John Lindley.[6]

The RHS Herbarium has its own image library (collection) consisting of more than 3,300 original watercolours, approximately 30,000 colour slides and a rapidly increasing number of digital images. Although most of the images have been supplied by photographers commissioned by the RHS, the archive includes a substantial number of slides from the Harry Smith Collection and Plant Heritage National Plant Collection holders.[22]

The libraries in each of the gardens are open to all visitors. RHS members can borrow books from the Lindley London, as well as the libraries at Wisley Garden and Harlow Carr Garden.[23]

In 2002, the RHS took over the administration of the Britain in Bloom competition from the Tidy Britain Group (formerly and subsequently Keep Britain Tidy).[24] In 2010, The society launched 'It's your neighbourhood', a campaign to encourage people to get involved in horticulture for the benefit of their community. In 2014, the 'Britain in Bloom' celebrates its 50th anniversary.[24] 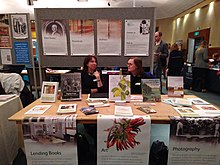 The RHS Level 1 Award in Practical Horticulture aims to develop essential horticultural skills and to provide a foundation for further RHS practical qualifications at Levels 2 and 3. It is aimed at anyone who has an interest in plants and gardening.[25]

Level 3 qualifications allow specialisation in the candidate's area of interest. They can offer proficiency for those looking for employment in horticulture, they can support further career and professional development for those already working in the field, or they can provide a basis for continued learning or training. As for Level 2, there are theoretical- and practical-based qualifications at Level 3 and a Diploma that combines both.[25]

The Master of Horticulture (RHS) Award is the society's most prestigious professional horticultural qualification. It is of degree level and it is intended for horticultural professionals. The course allows for flexible study over a period of three years or more.[25]

The RHS Campaign for School Gardening provides online inspiration, resources and advice to its members. With the help of teachers, volunteers and other school-gardening champions, they support millions of students in the UK, giving them the opportunity to grow plants, food and develop life skills.[1]

The society honours certain persons with the Victoria Medal of Honour who are deemed by its council to be deserving of special recognition in the field of horticulture. Other medals issued by the society include the Banksian, Knightian and Lindley medals, named after early officers of the society. It awards Gold, Silver-gilt, Silver and Bronze medals to exhibitors at its Flower Shows.[26]

The Veitch Memorial Medal, named after James Veitch, is awarded annually to persons of any nationality who have made an outstanding contribution to the advancement and improvement of the science and practice of horticulture.

Other awards bestowed by the society include the Associate of Honour and the Honorary Fellowship.[27]

The Award of Garden Merit, or AGM, is the principal award made to garden plants by the society after a period of assessment by the appropriate committees of the society. Awards are made annually after plant trials.

Older books may contain references to the following awards, which were based mainly on flower or fruit quality[28] (but which are not referred to in current (2014) RHS websites and reports):

PC: Preliminary Certificate
HC: Highly Commended
AM: Award of Merit (not the same as the AGM)
FCC: First Class Certificate (once a very prestigious award)

Since 1975 it has been entitled The Garden and is currently a monthly publication. The RHS also publishes both The Plant Review and The Orchid Review four times a year, and Hanburyana, an annual publication dedicated to horticultural taxonomy since 2006.[2][29][30]

Since the establishment of International Registration Authorities for plants in 1955 the RHS has acted as Registrar for certain groups of cultivated plants. It is now Registrar for nine categories – conifers, clematis, daffodils, dahlias, delphiniums, dianthus, lilies, orchids[31] and rhododendrons. It publishes The International Orchid Register, the central listing of orchid hybrids. It published Encyclopedia of Conifers in 2012.[citation needed]

The RHS publishes many horticulture and gardening books, including: