Not to be confused with Sacramento Valley.
Metropolitan area in California, United States

It lies in the Central Valley and Sierra Nevada regions of California. Greater Sacramento is anchored by Sacramento, the political center of California, the nation's most populous state with the largest number of representatives in the U.S. government, home of the California State Capitol and the secondary location of Supreme Court of California and was the original terminus for the First Transcontinental Railroad. Greater Sacramento also contains sites of natural beauty including Lake Tahoe, the largest alpine lake in North America and numerous ski and nature resorts. It is also located in one of the world's most important agricultural areas. The region's eastern counties are located in Gold Country, site of the California Gold Rush. 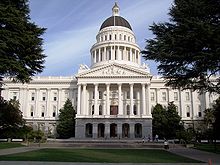 Greater Sacramento straddles two key regions of California, the Central Valley and the Sierra Nevada mountains and is overlapped by the cultural influences of three areas, the Bay Area, Eastern California and Northern California. An increasing phenomenon taking shape in Greater Sacramento is growth of urban sprawl as Sacramento and its metropolitan area continue to expand. The growth is due in part to first, higher costs of living in the Bay Area which have caused commuters to move as far as Yolo and Sacramento counties and more recently, growth and rising living costs in the core of Sacramento, building up more areas in the surrounding counties for commuters. Local and state governments are trying to prevent destruction of forests and open land and curbing the spread before Sacramento faces an urban sprawl crisis as the Greater Los Angeles Area has. It is the only interstate MSA/CSA in California.[4]

Sacramento is the largest city in the metropolitan area, home to approximately 500,000 people, making it the sixth-largest city in California and the 35th largest in the United States. It has been the state capital of California since 1851 and has played an important role in the history of California. When gold was discovered in nearby Sutter's Mill in Coloma, Sacramento became a boom town luring in migrants making their way from San Francisco to the gold fields of the Sierras. Although it did not become the financial and cultural center of Northern California, titles that were given to San Francisco, Sacramento became the largest transportation hub of not only Northern California, but also the West Coast following the completion of the First Transcontinental Railroad. Sacramento today continues to be one of the largest rail hubs in North America, and its rail station is one of the busiest in the United States. In 2002, Time Magazine featured an article recognizing Sacramento as the most diverse and integrated city in America.[5] Government (state and federal) jobs are still the largest sector of employment in the city and the city council does considerable effort to keep state agencies from moving outside the city limits.[6] The remainder of Sacramento County is suburban in general with most of the working population commuting to Downtown Sacramento and with a smaller proportion commuting all the way to the Bay Area. 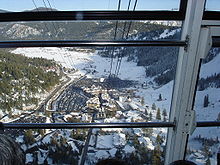 Palisades Tahoe, the site of the 1960 Winter Olympics

Yolo County serves as a commuter region as most of its working population commutes either to the Bay Area or Sacramento for work but is home to the University of California, Davis campus, the northernmost UC campus and only UC campus in the Greater Sacramento region. El Dorado and Placer Counties form the remainder of the inner core of Greater Sacramento and are composed of the Sierra foothills and mountains. The western areas of the counties are composed of commuter suburbs to Sacramento while the eastern areas border Lake Tahoe and are home to numerous ski resorts and towns such as South Lake Tahoe, site of the Heavenly Mountain Resort, which are popular in winter months and nature camps and resorts in summer months. Placer County has been an important mining area not only for gold, but also other minerals and granite. It is also the site of Squaw Valley, which hosted the 1960 Winter Olympics, which has been up to date, the only Winter Olympic Games to be held in California and the US West Coast and the smallest city to host an Olympics. 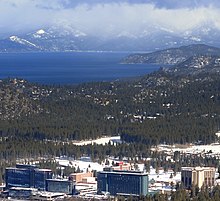 Stateline is an important Tahoe resort town on the shores of Lake Tahoe.

The Yuba–Sutter area consists of Yuba and Sutter counties and is a primarily agricultural area, although the southern area is more suburban in character. It is home to Sunsweet Growers, which owns the world's largest dried fruit plant in Yuba City. Nevada County, like El Dorado and Placer Counties, borders Lake Tahoe and contains numerous ski resorts such as the Boreal Mountain Resort, but is more rural than the former two counties and is an important gold mining area. The Donner Memorial State Park is located in the county, where the ill-fated Donner Party was trapped in winter storms in 1846–47 while attempting to make it to California on a poorly organized trip. 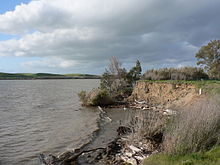 A cove inside the Sacramento River delta

The western half of Greater Sacramento is centered on the Central Valley, one of the most vital agricultural areas in the country. The Sierra Nevada and its foothills compose the eastern portion of the region. Yolo County contains a large flood control basin. The Sacramento River and the American River are major rivers that form a deepwater port connected to the San Francisco Bay by a channel through the Sacramento River Delta. Coniferous and oak-dominated woodland are prevalent in the Sierra Nevada and the Lake Tahoe area.

Sacramento and the valley area have a Mediterranean climate (Köppen Csa), characterized by damp to wet, cool winters and hot, dry summers. The wet season is generally October through April. Summer heat is often moderated by a sea breeze known as the "delta breeze" which comes through the Sacramento–San Joaquin River Delta from the San Francisco Bay.[8] January is the coolest month for the entire region with an average maximum of 41.0 °F (5.0 °C) and an average minimum of 15.1 °F (-9.4 °C) in Lake Tahoe.

Interstate 80 near the Donner Summit in wintertime

Owing to its central location between the Bay Area and Nevada border, Greater Sacramento is a key transportation hub into Northern California. While the region doesn't have an extensive public transportation system as the San Francisco Bay Area, Greater Sacramento has had an earlier history of public mass transit and is served by a vast freeway system as well as some light rail.

Sacramento is served by numerous highways. Five highways merge in the Capital City Corridor, serving the immediate downtown Sacramento area. The major freeways of the Greater Sacramento area are Interstate 80, US Route 50, Interstate 5, and State Route 99, which serve the northern Tahoe area, southern Tahoe area, and valley areas, respectively, as well as forming the Capital City Corridor along with Interstate 80 Business. Outside downtown Sacramento, there is only one principal route that serves its respective area and there are smaller state routes as well. Freeways and highways in the Greater Sacramento areas include:

Sacramento is the largest rail hub west of the Mississippi River and was the first terminus of the First Transcontinental Railroad before it extended to Oakland. The Sacramento Valley Station is the largest train station in the region, near Old Sacramento, and is connected by the Coast Starlight, California Zephyr, San Joaquins, Capitol Corridor and Thruway Motorcoach Amtrak routes. The Sacramento Regional Transit District is the local transit agency for Sacramento County and operates three light rail routes, the Blue Line, Green Line, and Gold Line, along 42.9 mi (69 km) of right-of-way that serve Sacramento and its immediate suburbs. Other train stations in the Greater Sacramento area are Davis, Roseville, Rocklin, Auburn, Colfax and Truckee.

In addition to being home of the state capital of California, Greater Sacramento is considered a politically competitive area with no major political party having a majority over the region.[17] Sacramento and Yolo counties have large Democratic pluralities with Democratic majorities in the recent 2008 presidential election, the former county being mainly urban and the latter home to the strongly Democratic university town of Davis. El Dorado, Placer, Yuba, and Sutter counties are predominantly Republican while Nevada County, despite a history of being held by Republican candidates, reflects the metropolitan area's competitiveness with pluralities between the two major parties and with a Democratic majority in the 2008 presidential election.

The only major professional sports team based in the Greater Sacramento area are the Sacramento Kings, who play at the Golden 1 Center in Downtown Sacramento. Sacramento residents also support the nearby San Francisco 49ers for football, being an hour and a half drive away or the Las Vegas Raiders who originally played in Oakland. Prior to 2009, the Sacramento Monarchs of the Women's National Basketball Association (WNBA) were also based at the Sleep Train Arena (then known as ARCO Arena), and were one of the most successful WNBA teams until the team folded.[19]

Greater Sacramento is also home to minor or secondary league sports teams. Sacramento Republic FC is a soccer team that plays in the USL Championship at Papa Murphy's Park, which is located on the grounds of Cal Expo. A new stadium in downtown Sacramento is planned to be completed ahead of the club's move to Major League Soccer (MLS).[18]