Sacramento County is the central county of the Greater Sacramento metropolitan area. The county covers about 994 square miles (2,570 km2) in the northern portion of the Central Valley, on into Gold Country. Sacramento County extends from the low delta lands between the Sacramento River and San Joaquin River, including Suisun Bay, north to about ten miles (16 km) beyond the State Capitol and east into the foothills of the Sierra Nevada Mountains. The southernmost portion of Sacramento County has direct access to San Francisco Bay.

Sacramento County was one of the original counties of California, which were created in 1850 at the time of statehood.

The county was named after the Sacramento River, which forms its western border. The river was named by Spanish cavalry officer Gabriel Moraga for the Santisimo Sacramento (Most Holy Sacrament), referring to the Catholic Eucharist.

Alexander Hamilton Willard, a member of the Lewis and Clark Expedition, is buried in the old Franklin Cemetery.

Places by population, ethnicity, and income

It is composed of the elected five-member Board of Supervisors, several other elected offices including the Sheriff, District Attorney, and Assessor, and numerous county departments and entities under the supervision of the County Executive Officer. In addition, several entities of the government of California have jurisdiction conterminous with Sacramento County, such as the Sacramento County Superior Court.

Under its foundational Charter, the five-member elected Sacramento County Board of Supervisors (BOS) is the county legislature. The board operates in a legislative, executive, and quasi-judicial capacity. The current members are:

Sacramento County was politically competitive in most presidential elections between 1952 and 2004, but now votes significantly in favor of the Democratic candidates. Candidates from the Democratic Party have carried the county in the past eight presidential elections, and have won a majority of the county's votes four times during that time (in 2008, 2012, 2016, and 2020). The city of Sacramento is strongly Democratic, while rural areas are strongly Republican; suburban areas are more divided. This pattern is also present in congressional and state legislative elections. The last Republican presidential candidate to win a majority in the county was George H.W. Bush in 1988.

In gubernatorial elections, Sacramento County is typically a bellwether, having voted for the winner every time since 1962 with the exception of 1970 and 2002.

In the House of Representatives, all of California's 7th congressional district and portions of its 3rd, 6th, and 9th districts are in the county.[24]

In the State Assembly, all of the 7th and 8th districts and parts of the 6th, 9th, and 11th districts are in the county.

Private, not for profit 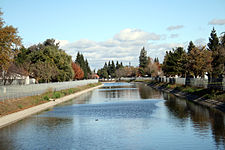 Amtrak and its Amtrak California subsidiary operate passenger rail service from the Sacramento Valley station. This station is served by the Coast Starlight, the California Zephyr, the Capitol Corridor, and the San Joaquins, which link the region with destinations across California and the United States.

The Sacramento County Department of Transportation (SACDOT)[29] maintains approximately 2200 miles of roadway within the unincorporated area. The roads range from six lane thoroughfares to rural roads.[30] 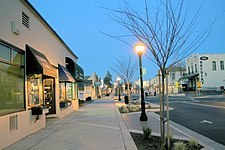 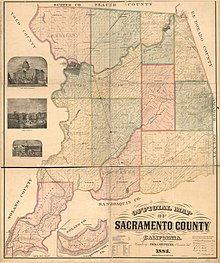 1885 map showing the boundaries of the county's 14 civil townships

The population ranking of the following table is based on the 2020 census of Sacramento County.[32]