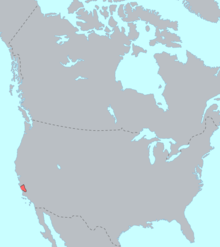 Pre-contact distribution of the Salinan.

The Salinan are a Native American tribe whose ancestral territory is in the southern Salinas Valley and the Santa Lucia Range in the Central Coast of California. Today, the Salinan governments are now working toward federal tribal recognition from the Bureau of Indian Affairs. 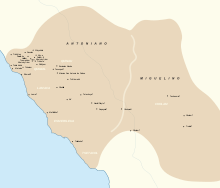 There were two major divisions, the Miguelino in the south, on the upper course of the Salinas River (which flows south to north), and the Antoniano in the north, in the lower part of the Salinas Basin, corresponding to the two missions in the Salinas Valley (Mission San Antonio de Padua and Mission San Miguel Arcángel). There were also a Playano group on the Pacific Coast in the vicinity of what is now San Simeon and Lucia. Before European contact, Salinans lived by hunting and gathering and, like most other California tribes, were organized in small groups with little centralized political structure.

The Salinan people were named after the Salinas River[1](1856) and John Powell (1891). The people's own name for themselves is the "Te'po'ta'ahl" or "People of the Oaks," according to current tribal leadership.[2] C. Hart Merriam called these people the En-'ne-sen on advice from one informant; En-'ne-sen was the native word for the Salinan headquarters.[3]

The Salinan language, spoken until the 1950s[4] is a language isolate. It may be a part of the Hokan language family. Sapir included it in a subfamily of Hokan, along with Chumash and Seri; this classification has found its way into more recent encyclopedias and presentations of language families, but serious supporting evidence has never been presented.[5]

Estimates for the pre-contact populations of most native groups in California have varied substantially. Alfred L. Kroeber put the 1770 population of the Salinan as 3,000.[6] Sherburne F. Cook similarly estimated that there were at least 700 Salinans.[7] The 2000 United States Census reported a total population of Salinan people as 681.[8]

The 56 acres (23 ha) Wagon Cave rock formation about 18 miles (29 km) northwest of present-day Jolon is an archeological site that was used by the Salinan Antonianos subtribe[9][10] who researchers believe occupied at least two villages in the area, an older site dating to approximately 450 A.D. and a later, protohistoric site with dates ranging from about 1450 to 1650 A.D. Archeologists have found a stemmed biface, lithic flakes, shell beads, and non-human bones, as well as shell, bone, flaked stone, fire-affected rock, charred seeds, and mortars at the cave site.[11] The rock overhangs and caves have fire-scarred roofs that bear evidence of occupancy over hundreds of years. The Wagon Cave Research Natural Area of 806 acres (326 ha) contains diverse stands of Valley Oaks of varying ages and densities and has been recommended as a Research Natural Areas within the Los Padres National Forest.[12]

In the late 1800s until the Big Sur Coast Highway was completed in 1937, homesteaders near Lucia and miners in the Los Burros Mining District used Wagon Cave as a resting point and overnight camp site when traveling to and from the coast. Travelers on horseback switched to wagons stored at the caves for the purpose of hauling items to market and provisions back from the railhead in Soledad.[10]