Scripps Research, previously known as The Scripps Research Institute (TSRI),[1] is a nonprofit American medical research facility that focuses on research and education in the biomedical sciences. Headquartered in San Diego, California, with a sister facility in Jupiter, Florida, the institute has over 200 laboratories employing 2,400 scientists,[2] technicians, graduate students, and administrative and other staff, making it the largest private, non-profit biomedical research organization in the United States and among the largest in the world.[citation needed]

The institute holds nearly 1,000 patents,[3] produced 9 FDA-approved therapeutics, and has generated over 50 spin-off companies. According to the 2017 Nature Innovation Index, Scripps Research is the #1 most influential research institution in the world.[4][5] The Scripps Research graduate program is ranked 10th nationally in the biological sciences, 5th for organic chemistry, and 2nd for biochemistry.[6]

In 2022, their Jupiter, FL campus became a part of the University of Florida. Many details of the reorganization are yet to be determined, or have not yet been made public.

Building B serves as the headquarters of Scripps Research's Florida campus.

Scripps Research began with the Scripps Metabolic Clinic, founded near the current site in the La Jolla area of San Diego in 1924 by philanthropist Ellen Browning Scripps,[7][8] who was inspired by the discovery of insulin. In 1946, the metabolic clinic separated from Scripps Memorial Hospital.

In 1956, Scripps Research was renamed Scripps Clinic and Research Foundation to reflect its broader focus and management's renewed commitment to biomedical research. Harvard biochemist A. Baird Hastings joined the institute in 1959, followed by immunologist Frank J. Dixon and colleagues William Weigle, Joseph Feldman, Charles Cochrane, and Jacinto Vazquez in 1961, biochemist Frank Huennekens and microbiologist John Spizizen in 1962. Dixon was appointed director of research operations in 1974, and in 1977 these operations assumed the name of The Research Institute of Scripps Clinic.[9]

Upon Dixon's retirement in 1986, Richard Lerner, who had been chair of the Scripps Department of Molecular Biology, was appointed the research institute's new director. In 1989, the institute launched a graduate program. In 1991, as the result of a merger of hospitals, the research branch became part of a larger organization, the Scripps Institutions of Medicine and Science. In 1993, the research division separated from the clinical side, becoming an independent nonprofit organization under the name of The Scripps Research Institute (TSRI).[9] An additional campus in Florida was instituted in 2004.

Michael Marletta became president and CEO in 2012, assuming the position from Lerner.[10] Marletta announced his resignation on July 21, 2014, and James C. Paulson was subsequently appointed acting president and CEO.

In September 2015, Peter G. Schultz was appointed CEO, and Steve A. Kay, president.[11] Kay announced he was returning to the University of Southern California in August 2016.[12]

In October 2016, TSRI announced a strategic affiliation with the non-profit California Institute for Biomedical Research (Calibr). The two organizations had already collaborated on several research programs in recent years, including the development of an antibody engineering platform aimed at improving treatments for chronic diseases such as diabetes and COPD, and immune therapies for the treatment of cancer.[13]

In February 2017, 5AM Ventures' John Diekman was named chairman of the board.[14]

In 2022, Scripps Florida separated from Scripps Research and became a part of the University of Florida, however they still retain the Scripps name.[15] 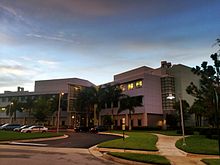 The institute also incorporates the:

According to the 2017 Nature Innovation Index, Scripps Research is the #1 most influential research institution in the world (LENS score of 18.1), followed by The Rockefeller University (LENS score of 15.4) and the Massachusetts Institute of Technology (MIT) (LENS score of 9.4).[4]

Scripps Research was noted as a standout in the Science Watch survey of "high-impact" papers in chemistry (1997–2008), ranked number one worldwide by citations per paper.[16]

Another measure of productivity, the Hirsch index (which has been published by Chemistry World), placed six Scripps Research scientists – Wüthrich, Sharpless, Lerner, Yates, Schultz, and Chi-Huey Wong – in the top 100 of 2,000 chemists rated. Science Watch placed Sharpless within the Top 10 list of its "Top 100 Chemists 2000–2010" based on citations impact; other faculty in the list were the late Carlos F. Barbas and John R. Yates.[27]

Medical therapies based on Scripps Research findings include:[30]

The graduate program at Scripps Research started in 1989 as the Macromolecular and Cellular Structure and Chemistry (MCSC) Program. A program in Chemistry followed three years after the establishment of the MCSC Program. In 2003, the institute redefined the curriculum to allow and encourage students to build course loads in an interdisciplinary manner. In 2005, Scripps Research's graduate program expanded to encompass the Jupiter, Florida campus. Today, approximately 300 graduate students are enrolled in the program, which offers doctoral degrees in the chemical and biological sciences. In addition to its Ph.D. programs, Scripps Research offers a master's degree in the discipline of Clinical and Translational Investigation (MCTI) for physician-scientists. The institute also administers the Skaggs-Oxford Scholarship program, which enables students to pursue a joint Ph.D./D.Phil. with the University of Oxford.

In 2018, the program was renamed the Skaggs Graduate School of Chemical and Biological Sciences following a gift from the Skaggs family.[32]

Florida Atlantic University launched a new joint MD/PhD program association with Scripps Florida. The first students entered the new program in fall 2011.[33] Previously, Scripps Research and the Scripps Health hospital network explored the idea of starting a medical school in California,[34] but this project did not come to fruition.

The California and Florida campuses both offer educational outreach programs for high school students and undergraduates interested in learning more about science.

The grand opening of the new facility took place on February 26, 2009, five years after Scripps Florida started operating, with a public ceremony that drew many dignitaries including then Florida Gov. Charlie Crist.

In 2022, Scripps Florida became a part of University of Florida Health.[15]

Grants and contracts provide funding for a significant portion of the institute's research. This revenue is derived primarily from the National Institutes of Health and other federal agencies. In addition, grantors include, among others, the American Cancer Society, the American Heart Association, the Cystic Fibrosis Foundation, the Leukemia & Lymphoma Society, and the Juvenile Diabetes Association.

The establishment of the Scripps Florida campus was made possible by a one-time $310 million appropriation of federal economic development funds and by the Florida State Legislature and by an economic package provided by Palm Beach County.[36]