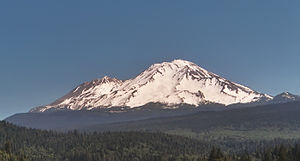 The Shasta Cascade region of California is located in the northeastern and north-central sections of the state bordering Oregon and Nevada, including far northern parts of the Central Valley and the Sierra Nevada mountain range.

Historically, the Shasta Cascade region was home to Native Americans of the Modoc, Maidu, Okwanuchu, Paiute, Shasta, Wintu, and Yana tribes, and sub-groups of those tribes.

The first non-Native Americans entered the Shasta Cascade region by coming south along the Siskiyou Trail from Oregon, or north along the Siskiyou Trail from central California or the San Francisco Bay Area. These earliest explorers were probably British and American fur-trappers and traders in the 1820s and 1830s, although it is also possible that Spanish explorers reached the southern edge of the Shasta Cascade region before 1820.

The discovery of gold in 1851 at Yreka (and throughout Siskiyou and Trinity counties) brought the California Gold Rush-era prospectors up the rivers of the region in search of gold, leading to the first non-Native American settlements in the area, including at Old Shasta, Portuguese Flat, Upper Soda Springs, Weaverville, and Yreka itself.

Geologically, this region is similar to the main Cascade Range, dominated by volcanism.