Shizuoka is the capital and Hamamatsu is the largest city in Shizuoka Prefecture, with other major cities including Fuji, Numazu, and Iwata.[2] Shizuoka Prefecture is located on Japan's Pacific Ocean coast and features Suruga Bay formed by the Izu Peninsula, and Lake Hamana which is considered to be one of Japan's largest lakes. Mount Fuji, the tallest volcano in Japan and cultural icon of the country, is partially located in Shizuoka Prefecture on the border with Yamanashi Prefecture. Shizuoka Prefecture has a significant motoring heritage as the founding location of Honda, Suzuki, and Yamaha, and is home to the Fuji International Speedway.

View of Mt. Fuji from Numazu

Shizuoka Prefecture was established from the former Tōtōmi, Suruga and Izu provinces.[3]

The area was the home of the first Tokugawa shōgun.[citation needed] Tokugawa Ieyasu held the region until he conquered the lands of the Hōjō clan in the Kantō region and placed land under the stewardship of Toyotomi Hideyoshi. After becoming shōgun, Tokugawa took the land back for his family and put the area around modern-day Shizuoka city under the direct supervision of the shogunate. With the creation of Shizuoka han in 1868, it once again became the residence of the Tokugawa family.

Shizuoka Prefecture is an elongated region following the coast of the Pacific Ocean at the Suruga Bay. In the west, the prefecture extends deep into the Japan Alps. In the east, it becomes a narrower coast bounded in the north by Mount Fuji, until it comes to the Izu Peninsula, a popular resort area pointing south into the Pacific.[citation needed]

As of April 2012, 11% of the total land area of the prefecture was designated as Natural Parks, namely the Fuji-Hakone-Izu and Minami Alps National Parks; Tenryū-Okumikawa Quasi-National Park; and four Prefectural Natural Parks.[4]

Throughout history, a disastrous earthquake called the Tokai earthquake has hit Shizuoka every 100 to 150 years. On 15 March 2011, Shizuoka Prefecture was hit with a magnitude 6.2 earthquake approximately 42 km (26 mi) NNE of Shizuoka City.

See also: List of cities in Shizuoka Prefecture by population 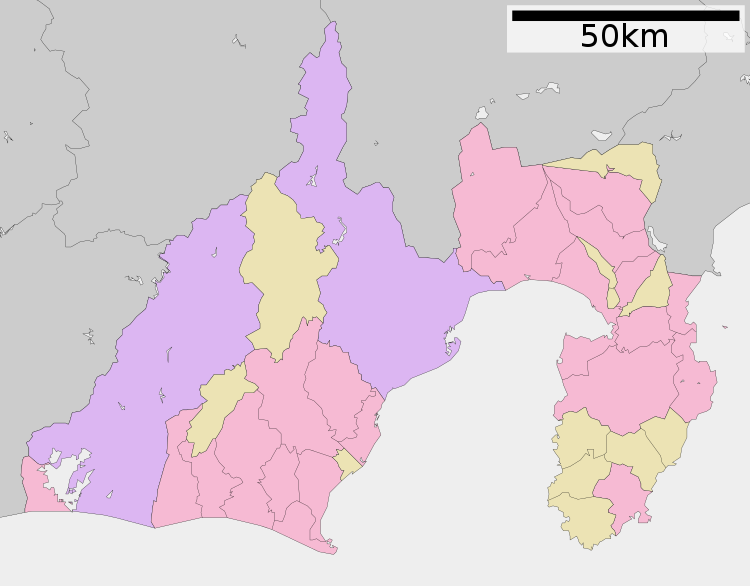 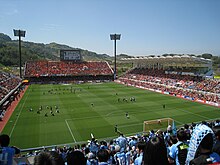 The sports teams listed below are based in Shizuoka. 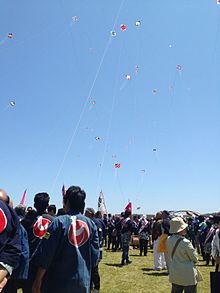 A kite festival in Hamamatsu, May 2013