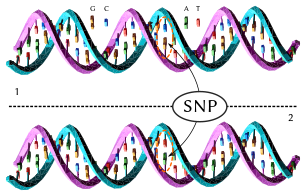 In genetics, a single-nucleotide polymorphism (SNP /snɪp/; plural SNPs /snɪps/) is a germline substitution of a single nucleotide at a specific position in the genome. Although certain definitions require the substitution to be present in a sufficiently large fraction of the population (e.g. 1% or more),[1] many publications[2][3][4] do not apply such a frequency threshold.

A single-nucleotide variant (SNV) is a general term for single nucleotide change in DNA sequence. So a SNV can be a common SNP or a rare mutation, and can be germline or somatic[9][10] and can be caused by cancer,[11] but a SNP has to segregate in a species' population of organisms. SNVs also commonly arise in molecular diagnostics such as designing PCR primers to detect viruses, in which the viral RNA or DNA sample may contain SNVs. 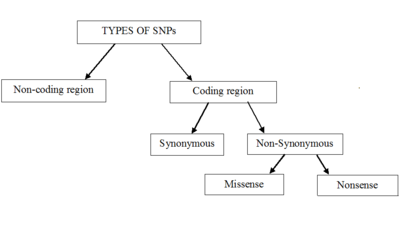 Single-nucleotide polymorphisms may fall within coding sequences of genes, non-coding regions of genes, or in the intergenic regions (regions between genes). SNPs within a coding sequence do not necessarily change the amino acid sequence of the protein that is produced, due to degeneracy of the genetic code.[citation needed]

SNPs that are not in protein-coding regions may still affect gene splicing, transcription factor binding, messenger RNA degradation, or the sequence of noncoding RNA. Gene expression affected by this type of SNP is referred to as an eSNP (expression SNP) and may be upstream or downstream from the gene.

More than 335 million SNPs have been found across humans from multiple populations.[citation needed] A typical genome differs from the reference human genome at 4 to 5 million sites, most of which (more than 99.9%) consist of SNPs and short indels.[17]

The genomic distribution of SNPs is not homogenous; SNPs occur in non-coding regions more frequently than in coding regions or, in general, where natural selection is acting and "fixing" the allele (eliminating other variants) of the SNP that constitutes the most favorable genetic adaptation.[18] Other factors, like genetic recombination and mutation rate, can also determine SNP density.[19]

SNP density can be predicted by the presence of microsatellites: AT microsatellites in particular are potent predictors of SNP density, with long (AT)(n) repeat tracts tending to be found in regions of significantly reduced SNP density and low GC content.[20]

There are variations between human populations, so a SNP allele that is common in one geographical or ethnic group may be much rarer in another. However, this pattern of variation is relatively rare; in a global sample of 67.3 million SNPs, the Human Genome Diversity Project "found no such private variants that are fixed in a given continent or major region. The highest frequencies are reached by a few tens of variants present at >70% (and a few thousands at >50%) in Africa, the Americas, and Oceania. By contrast, the highest frequency variants private to Europe, East Asia, the Middle East, or Central and South Asia reach just 10 to 30%."[21]

With this knowledge scientists have developed new methods in analyzing population structures in less studied species.[23][24][25] By using pooling techniques the cost of the analysis is significantly lowered.[citation needed] These techniques are based on sequencing a population in a pooled sample instead of sequencing every individual within the population by itself. With new bioinformatics tools there is a possibility of investigating population structure, gene flow and gene migration by observing the allele frequencies within the entire population. With these protocols there is a possibility in combining the advantages of SNPs with micro satellite markers.[26][27] However, there are information lost in the process such as linkage disequilibrium and zygosity information.

Variations in the DNA sequences of humans can affect how humans develop diseases and respond to pathogens, chemicals, drugs, vaccines, and other agents. SNPs are also critical for personalized medicine.[31] Examples include biomedical research, forensics, pharmacogenetics, and disease causation, as outlined below.

One of main contributions of SNPs in clinical research is genome-wide association study (GWAS).[32] Genome-wide genetic data can be generated by multiple technologies, including SNP array and whole genome sequencing. GWAS has been commonly used in identifying SNPs associated with diseases or clinical phenotypes or traits. Since GWAS is a genome-wide assessment, a large sample site is required to obtain sufficient statistical power to detect all possible associations. Some SNPs have relatively small effect on diseases or clinical phenotypes or traits. To estimate study power, the genetic model for disease needs to be considered, such as dominant, recessive, or additive effects. Due to genetic heterogeneity, GWAS analysis must be adjusted for race.

Genome-wide SNP data can be used for homozygosity mapping.[34] Homozygosity mapping is a method used to identify homozygous autosomal recessive loci, which can be a powerful tool to map genomic regions or genes that are involved in disease pathogenesis.

SNPs have historically been used to match a forensic DNA sample to a suspect but has been made obsolete due to advancing STR-based DNA fingerprinting techniques. However, the development of next-generation-sequencing (NGS) technology may allow for more opportunities for the use of SNPs in phenotypic clues such as ethnicity, hair color, and eye color with a good probability of a match. This can additionally be applied to increase the accuracy of facial reconstructions by providing information that may otherwise be unknown, and this information can be used to help identify suspects even without a STR DNA profile match.

Some cons to using SNPs versus STRs is that SNPs yield less information than STRs, and therefore more SNPs are needed for analysis before a profile of a suspect is able to be created. Additionally, SNPs heavily rely on the presence of a database for comparative analysis of samples. However, in instances with degraded or small volume samples, SNP techniques are an excellent alternative to STR methods. SNPs (as opposed to STRs) have an abundance of potential markers, can be fully automated, and a possible reduction of required fragment length to less than 100bp.[26]

Pharmacogenetics focuses on identifying genetic variations including SNPs associated with differential responses to treatment.[35] Many drug metabolizing enzymes, drug targets, or target pathways can be influenced by SNPs. The SNPs involved in drug metabolizing enzyme activities can change drug pharmacokinetics, while the SNPs involved in drug target or its pathway can change drug pharmacodynamics. Therefore, SNPs are potential genetic markers that can be used to predict drug exposure or effectiveness of the treatment. Genome-wide pharmacogenetic study is called pharmacogenomics. Pharmacogenetics and pharmacogenomics are important in the development of precision medicine, especially for life threatening diseases such as cancers.

Only small amount of SNPs in the human genome may have impact on human diseases. Large scale GWAS has been done for the most important human diseases, including heart diseases, metabolic diseases, autoimmune diseases, and neurodegenerative and psychiatric disorders.[32] Most of the SNPs with relatively large effects on these diseases have been identified. These findings have significantly improved understanding of disease pathogenesis and molecular pathways, and facilitated development of better treatment. Further GWAS with larger samples size will reveal the SNPs with relatively small effect on diseases. For common and complex diseases, such as type-2 diabetes, rheumatoid arthritis, and Alzheimer’s disease, multiple genetic factors are involved in disease etiology. In addition, gene-gene interaction and gene-environment interaction also play an important role in disease initiation and progression.[36]

As there are for genes, bioinformatics databases exist for SNPs.

The International SNP Map working group mapped the sequence flanking each SNP by alignment to the genomic sequence of large-insert clones in Genebank. These alignments were converted to chromosomal coordinates that is shown in Table 1.[48] This list has greatly increased since, with, for instance, the Kaviar database now listing 162 million single nucleotide variants (SNVs).

The nomenclature for SNPs include several variations for an individual SNP, while lacking a common consensus.

The rs### standard is that which has been adopted by dbSNP and uses the prefix "rs", for "reference SNP", followed by a unique and arbitrary number.[49] SNPs are frequently referred to by their dbSNP rs number, as in the examples above.

The Human Genome Variation Society (HGVS) uses a standard which conveys more information about the SNP. Examples are:

Programs for prediction of SNP effects

An important group of SNPs are those that corresponds to missense mutations causing amino acid change on protein level. Point mutation of particular residue can have different effect on protein function (from no effect to complete disruption its function). Usually, change in amino acids with similar size and physico-chemical properties (e.g. substitution from leucine to valine) has mild effect, and opposite. Similarly, if SNP disrupts secondary structure elements (e.g. substitution to proline in alpha helix region) such mutation usually may affect whole protein structure and function. Using those simple and many other machine learning derived rules a group of programs for the prediction of SNP effect was developed:[54]