Desert in northwestern Mexico and the southwestern United States

The Sonoran Desert (Spanish: Desierto de Sonora) is a North American desert and ecoregion that covers large parts of the southwestern United States (in Arizona and California), as well as the northwestern Mexican states of Sonora, Baja California, and Baja California Sur. It is the hottest desert in both Mexico and the United States. It has an area of 260,000 square kilometers (100,000 sq mi).

In phytogeography, the Sonoran Desert is within the Sonoran Floristic province of the Madrean Region of southwestern North America, part of the Holarctic realm of the northern Western Hemisphere. The desert contains a variety of unique endemic plants and animals, notably, the saguaro (Carnegiea gigantea) and organ pipe cactus (Stenocereus thurberi).

The Sonoran Desert is clearly distinct from nearby deserts (e.g., the Great Basin, Mojave, and Chihuahuan deserts) because it provides subtropical warmth in winter and two seasons of rainfall (in contrast, for example, to the Mojave's dry summers and cold winters). This creates an extreme contrast between aridity and moisture.[3]

The Sonoran desert wraps around the northern end of the Gulf of California, from Baja California Sur (El Vizcaíno Biosphere Reserve in central and Pacific west coast, Central Gulf Coast subregion on east to southern tip), north through much of Baja California, excluding the central northwest mountains and Pacific west coast, through southeastern California and southwestern and southern Arizona to western and central parts of Sonora.[4]

To the north in California and northwest Arizona, the Sonoran Desert transitions to the colder-winter, higher-elevation Mojave, Great Basin, and Colorado Plateau deserts.

The desert's sub-regions include the Colorado Desert of southeastern California; and the Yuma Desert east of the north-to-south section of the Colorado River in southwest Arizona. In the 1957 publication Vegetation of the Sonoran Desert, Forrest Shreve divided the Sonoran Desert into seven regions according to characteristic vegetation: Lower Colorado Valley, Arizona Upland, Plains of Sonora, Foothills of Sonora, Central Gulf Coast, Vizcaíno Region, and Magdalena Region.[5] Many ecologists consider Shreve's Vizcaíno and Magdalena regions, which lie on the western side of the Baja California Peninsula, to be a separate ecoregion, the Baja California Desert.

The Sonoran desert has an arid subtropical climate. In the lower-elevation portions of the desert, temperatures are warm year-round, and rainfall is infrequent and irregular, often less than 90 mm annually. The Arizona uplands are also warm year-round, but they receive 100–300 mm of average annual rainfall, which falls in a more regular bi-seasonal pattern.[2] 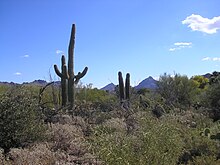 The Sonoran Desert near Tucson, Arizona during winter.

Many plants not only survive, but thrive in the harsh conditions of the Sonoran Desert. Many have evolved to have specialized adaptations to the desert climate. The Sonoran Desert's bi-seasonal rainfall pattern results in more plant species than any other desert in the world.[2] The Sonoran Desert includes plant genera and species from the agave family, palm family, cactus family, legume family, and numerous others.

The Sonoran is the only place in the world where the famous saguaro cactus (Carnegiea gigantea) grows in the wild.[7] Cholla (Cylindropuntia spp.), beavertail (Opuntia basilaris), hedgehog (Echinocereus spp.), fishhook (Ferocactus wislizeni), prickly pear (Opuntia spp.), nightblooming cereus (Peniocereus spp.), and organ pipe (Stenocereus thurberi) are other taxa of cacti found here. Cactus provides food and homes to many desert mammals and birds, with showy flowers in reds, pinks, yellows, and whites, blooming most commonly from late March through June, depending on the species and seasonal temperatures.

The California fan palm (Washingtonia filifera) is found in the Colorado Desert section of the Sonoran Desert, the only native palm in California, among many other introduced Arecaceae genera and species. It is found at spring-fed oases, such as in Anza Borrego Desert State Park, Joshua Tree National Park, and the Kofa National Wildlife Refuge.[9]

Three hundred fifty bird species, 20 amphibian species, over 100 reptile species, 30 native fish species, over 1000 native bee species, and more than 2,000 native plant species can be found in the desert area.[10] The Sonoran Desert area southeast of Tucson and near the Mexican border is vital habitat for the only population of jaguars living within the United States.[11] The Colorado River Delta was once an ecological hotspot within the Sonoran desert due to the Colorado river in this otherwise dry area, but the delta has been greatly reduced in extent due to the damming and use of the river upstream. Species that have higher heat tolerance are able to thrive in the conditions of the Sonoran Desert. One such insect species that has evolved a means to thrive in this environment is Drosophila mettleri, a Sonoran Desert fly. This fly contains a specialized P450 detoxification system that enables it to nest in the cool region of exudate moistened soil. Thus, the fly is one of few that can tolerate the high desert temperatures and successfully reproduce.

The Sonoran Desert is home to the cultures of over 17 contemporary Native American tribes, with settlements at American Indian reservations in California and Arizona, as well as populations in Mexico.

The largest city in the Sonoran Desert is Phoenix, Arizona, with a 2017 metropolitan population of about 4.7 million.[12] Located on the Salt River in central Arizona, it is one of the fastest-growing metropolitan areas in the United States. In 2007 in the Phoenix area, desert was losing ground to urban sprawl at a rate of approximately 4,000 square meters (1 acre) per hour.[13]

The Coachella Valley, located in the Colorado Desert section of the Sonoran Desert, has a population of 365,000. Several famous Southern California desert resort cities such as Palm Springs and Palm Desert are located here.

The entrance to Palm Springs, California via Highway 62

During the winter months, from November to April, the daytime temperatures in the Coachella Valley range from 70 °F (21 °C) to 90 °F (32 °C) and corresponding nighttime lows range from 46 °F (8 °C) to 68 °F (20 °C) making it a popular winter resort destination. Due to its warm year-round climate citrus and subtropical fruits such as mangoes, figs, and dates are grown in the Coachella Valley and adjacent Imperial Valley. The Imperial Valley has a total population of over 180,000 and has a similar climate to that of the Coachella Valley. Other cities include Borrego Springs, Indio, Coachella, Calexico, El Centro, Imperial, and Blythe.

Straddling the US-Mexican border with low levels of human-installed security, the Sonoran desert is a route for unauthorized entry across the border. The harsh conditions mean that the 3-to-5-day march, usually moving at night to minimize exposure to the heat, sometimes results in death.[16] 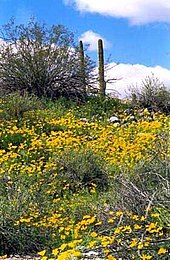