College stadium located in Stanford, California
Not to be confused with Sanford Stadium.

Stanford Stadium is an outdoor athletic stadium in Stanford, California, on the campus of Stanford University. It is the home of the Stanford Cardinal college football team as well as the site of the university's commencement exercises. It opened in 1921 as a football and track and field stadium,[7] an earthen horseshoe with wooden bleacher seating and flooring[8] upon a steel frame.[9][10] Its original seating capacity was 60,000, which grew to 89,000 by 1927 as a nearly enclosed bowl.[11]

Immediately following the 2005 season, the stadium was demolished and rebuilt as a dual-deck concrete structure, without a track. Today, it seats 50,424. The natural grass playing field runs NW-SE, at an approximate elevation of 60 feet (18 m) above sea level.

Stanford Stadium was built in five months in 1921 and opened its gates on November 19, replacing Stanford Field.[12] The first game was against rival California, who defeated Stanford 42–7 in the Big Game.[13] Seating capacity was originally 60,000, with a 66-row, U-Shaped structure second only to the Yale Bowl in size at the time.[14]

In 1925, 10,200 seats were added to the stadium, nearly enclosing the horseshoe while still keeping the overall height of the facility intact. In 1927, fourteen additional rows of seating were added,[11] increasing the stadium to its maximum capacity of 85,500, with eighty rows of seating.[15][16] In 1932, the stadium hosted the USA Outdoor Track and Field Championships. In 1935, Stanford Stadium set a record (for the time) for single-game attendance, with 94,000 spectators filling it for a 13–0 victory over California.

In January 1985, Super Bowl XIX was held in Stanford Stadium, with the Bay Area's own San Francisco 49ers defeating the Miami Dolphins, 38–16.

On October 22, 1989, the San Francisco 49ers played a home game at the stadium against the New England Patriots, as Candlestick Park had suffered serious damage following the Loma Prieta earthquake five days earlier.

The stadium has hosted soccer matches for the 1984 Summer Olympics as one of three venues outside southern California for that Olympics,[17] the 1994 FIFA World Cup, and the 1999 FIFA Women's World Cup.

Other high-profile events hosted at Stanford Stadium include Herbert Hoover's acceptance speech for the 1928 Republican Presidential nomination[18] and the 1962 edition of the long-running (1958–1985) series of track meets between the United States and the Soviet Union.[19][20] 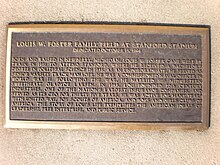 The stadium has gone a number of significant renovations since the 1920s. In 1960, a press box was added, while the first, and last synthetic athletics track was installed in 1978 (replacing the cinder track that had been used for many years).

In 1985, prior to Super Bowl XIX, the press box was renovated, new locker rooms were installed, a ticket complex and dressing room for game officials were added, and the number of restrooms were increased.[21]

In 1994, prior to the 1994 FIFA World Cup, the lower level of the press box was expanded and aluminum benches were installed throughout the stadium. The crown of the playing surface was also reduced.[21]

In 1995, a $10 million gift from Los Angeles insurance executive and 1935 Stanford graduate Louis W. Foster enabled further updates to the stadium, including widening the concourse, improving the restrooms, and replacing the remaining wooden seats. In honor of his gift, Stanford named the playing surface the Louis W. Foster Family Field at Stanford Stadium.[21][22] 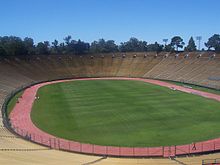 The stadium's interior in May 2004, prior to its reconstruction

In June 2005, the university Board of Trustees authorized plans for the stadium's demolition and reconstruction that would remove the track, reduce the stadium capacity, and bring it up to date with present standards for sporting venues. Various justifications for the renovation included poor sightlines in the existing stadium (rendering the bottom 14 rows unusable), long stairways, and lack of adequate restroom facilities. The track around the stadium had previously created a large distance between the field and the spectators.

The capacity of the new stadium was set to be approximately 50,000 seats made by Ducharme Seating. The reduction in capacity was a strategic decision by Stanford's Athletics Program to boost season ticket sales and create a more intimate playing atmosphere without sacrificing the ability to host large world-class events, such as the FIFA World Cup in the future. This was partially the result of San Francisco's failure to secure a bid for the 2012 Olympics, which would have featured a renovated Stanford Stadium as the main Olympic Venue.

Construction began minutes after the Cardinal's last home game of the 2005 football season, a 38–31 loss to Notre Dame on November 26. Bulldozers began tearing out the natural field turf in a ceremony held while attendees were still in the stadium for the game. Construction proceeded quickly through the winter and spring with the goal of opening in time for Stanford's game against San Jose State on September 9, 2006, but the game had to be relocated to San Jose State's Spartan Stadium due to an unusually wet winter and resulting construction delays. In the summer of 2006, a construction worker fell 23 feet (7.0 m) to his death.[23]

The stadium opened on September 16, 2006 with Stanford losing to Navy 37–9. The Stanford Band was not present at the stadium opening since they were not permitted to play at any athletic events in the month of September due to accusations of vandalism to a temporary trailer which formerly served as their rehearsal facility. Instead, the Navy band performed at halftime and played throughout the game.

In 2013, Stanford upgraded their scoreboards with twin HD video boards. Also, a 1,673-foot (510 m) ribbon board was added, which displays out-of-town scores and real-time statistics.

Panoramic views of Stanford Stadium through the ages

The stadium during the 2008 Stanford-USC game, played on November 15. It marked the first sellout of the new Stanford Stadium since its re-opening in 2006.[24]