In virology, realm is the highest taxonomic rank established for viruses by the International Committee on Taxonomy of Viruses (ICTV), which oversees virus taxonomy. Six virus realms are recognized and united by specific highly conserved traits:

The rank of realm corresponds to the rank of domain used for cellular life, but differs in that viruses in a realm do not necessarily share a common ancestor based on common descent nor do the realms share a common ancestor. Instead, realms group viruses together based on specific traits that are highly conserved over time, which may have been obtained on a single occasion or multiple occasions. As such, each realm represents at least one instance of viruses coming into existence. While historically it was difficult to determine deep evolutionary relations between viruses, in the 21st century methods such as metagenomics and cryogenic electron microscopy have enabled such research to occur, which led to the establishment of Riboviria in 2018, three realms in 2019, and two in 2020. 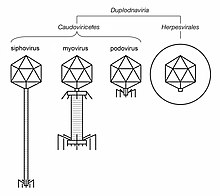 Duplodnaviria contains double-stranded DNA (dsDNA) viruses that encode a major capsid protein (MCP) that has the HK97 fold. Viruses in the realm also share a number of other characteristics involving the capsid and capsid assembly, including an icosahedral capsid shape and a terminase enzyme that packages viral DNA into the capsid during assembly. Two groups of viruses are included in the realm: tailed bacteriophages, which infect prokaryotes and are assigned to the order Caudovirales, and herpesviruses, which infect animals and are assigned to the order Herpesvirales.[2]

The relation between caudoviruses and herpesviruses is not certain, as they may either share a common ancestor or herpesviruses may be a divergent clade from within Caudovirales. A common trait among duplodnaviruses is that they cause latent infections without replication while still being able to replicate in the future.[7][8] Tailed bacteriophages are ubiquitous worldwide,[9] important in marine ecology,[10] and the subject of much research.[11] Herpesviruses are known to cause a variety of epithelial diseases, including herpes simplex, chickenpox and shingles, and Kaposi's sarcoma.[12][13][14]

CRESS-DNA viruses include three kingdoms that infect prokaryotes: Loebvirae, Sangervirae, and Trapavirae. The kingdom Shotokuvirae contains eukaryotic CRESS-DNA viruses and the atypical members of Monodnaviria.[3] Eukaryotic monodnaviruses are associated with many diseases, and they include papillomaviruses and polyomaviruses, which cause many cancers,[15][16] and geminiviruses, which infect many economically important crops.[17]

Riboviria contains all RNA viruses that encode an RNA-dependent RNA polymerase (RdRp), assigned to the kingdom Orthornavirae, and all reverse transcribing viruses, i.e. all viruses that encode a reverse transcriptase (RT), assigned to the kingdom Pararnavirae. These enzymes are vital in the viral life cycle, as RdRp transcribes viral mRNA and replicates the genome, and RT likewise replicates the genome.[4] Riboviria mostly contains eukaryotic viruses, and most eukaryotic viruses, including most human, animal, and plant viruses, belong to the realm.[18]

Most widely known viral diseases are caused by viruses in Riboviria, which includes influenza viruses, HIV, coronaviruses, ebolaviruses, and the rabies virus,[6] as well as the first virus to be discovered, Tobacco mosaic virus.[19] Reverse transcribing viruses are a major source of horizontal gene transfer by means of becoming endogenized in their host's genome, and a significant portion of the human genome consists of this viral DNA.[20] 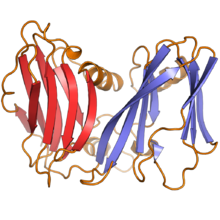 A ribbon diagram of the MCP of Pseudoalteromonas virus PM2, with the two jelly roll folds colored in red and blue

Varidnaviria contains DNA viruses that encode MCPs that have a jelly roll fold folded structure in which the jelly roll (JR) fold is perpendicular to the surface of the viral capsid. Many members also share a variety of other characteristics, including a minor capsid protein that has a single JR fold, an ATPase that packages the genome during capsid assembly, and a common DNA polymerase. Two kingdoms are recognized: Helvetiavirae, whose members have MCPs with a single vertical JR fold, and Bamfordvirae, whose members have MCPs with two vertical JR folds.[5]

Marine viruses in Varidnaviria are ubiquitous worldwide and, like tailed bacteriophages, play an important role in marine ecology.[21] Most identified eukaryotic DNA viruses belong to the realm.[22] Notable disease-causing viruses in Varidnaviria include adenoviruses, poxviruses, and the African swine fever virus.[6] Poxviruses have been highly prominent in the history of modern medicine, especially Variola virus, which caused smallpox.[23] Many varidnaviruses are able to become endogenized, and a peculiar example of this are virophages, which confer protection for their hosts against giant viruses during infection.[22]

Realm Adnaviria unifies archaeal filamentous viruses with linear A-form double-stranded DNA genomes and characteristic major capsid proteins unrelated to those encoded by other known viruses.[24] The realm currently includes viruses from three families, Lipothrixviridae, Rudiviridae, and Tristromaviridae, all infecting hyperthermophilic archaea. The nucleoprotein helix of adnaviruses is composed of asymmetric units containing two MCP molecules, a homodimer in the case of rudivirids and a heterodimer of paralogous MCPs in the case of lipothrixvirids and tristromavirids.[25][26] The MCPs of ligamenviral particles have a unique α-helical fold first found in the MCP of rudivirid Sulfolobus islandicus rod-shaped virus 2 (SIRV2).[27] All members of the Adnaviria share a characteristic feature in that the interaction between the MCP dimer and the linear dsDNA genome maintains the DNA in the A form. Consequently, the entire genome adopts the A form in virions. Like many structurally related viruses in the two other realms of dsDNA viruses (Duplodnaviria and Varidnaviria), there is no detectable sequence similarity among the capsid proteins of viruses from different tokiviricete families, suggesting a vast undescribed diversity of viruses in this part of the virosphere.

Ribozyviria is characterised by the presence of genomic and antigenomic ribozymes of the Deltavirus type. Additional common features include a rod-like structure and a RNA-binding "delta antigen" encoded in the genome.[28]

In general, virus realms have no genetic relation to each other based on common descent, in contrast to the three domains of cellular life—Archaea, Bacteria, and Eukarya—which share a common ancestor. Likewise, viruses within each realm are not necessarily descended from a common ancestor since realms group viruses together based on highly conserved traits, not common ancestry, which is used as the basis for the taxonomy of cellular life. As such, each virus realm is considered to represent at least one instance of viruses coming into existence.[29] By realm:

While the realms generally have no genetic relation to each other, there are some exceptions:

Prior to the 21st century, it was believed that deep evolutionary relations between viruses could not be discovered due to their high mutation rates and small number of genes making discovering these relations more difficult. Because of this, the highest taxonomic rank for viruses from 1991 to 2017 was order. In the 21st century, however, various methods have been developed that have enabled these deeper evolutionary relationships to be studied, including metagenomics, which has identified many previously unidentified viruses, and comparison of highly conserved traits, leading to the desire to establish higher-level taxonomy for viruses.[29]