Torrance High School is a high school located in Torrance, California. Founded in 1917, it is one of the oldest high schools in continuous use in California and is the oldest of the four high schools in the Torrance Unified School District. Four of its buildings are listed on the U.S. National Register of Historic Places.

Torrance High School is a popular filming location for television and motion picture production. It is most widely known for its appearance in high-profile television shows, including Beverly Hills, 90210 and Buffy the Vampire Slayer. It is the alma mater of broadcaster Paul Moyer, Medal of Honor recipient Ted Tanouye, World War II prisoner of war Louis Zamperini, professional golfer Angela Park and professional golfer Jenny Shin.

Torrance High School first opened on September 11, 1917,[citation needed] under the jurisdiction of the Los Angeles High School District,[3] as a combination high school and elementary school to accommodate the area's rapid post-World War I growth brought on by the region's petroleum industry and iron works, as well as the Pacific Electric Railway expansion.[citation needed] 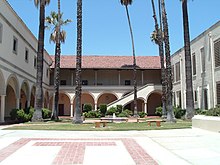 The 1923 "Senior Patio" behind the THS Main Building. The distinctive Mediterranean Revival style façade of the Main Building is a filming location for many shows.

Torrance High has over 100 classrooms; a library; access to site, district, and county media resources; five computer labs; at least one computer per classroom; two gyms; and local athletic fields.

The Main Building 1917 with the 1921 'L wing' additions, the Senior Patio, the 1921 original Science Building—current Home Economics Building, the Streamline Moderne style 1937 Auditorium, and the first 1923 Torrance Elementary School, now referred to as the Annex: are all listed on the National Register of Historic Places (in 1983). These were Torrance's first such landmark listings. In 1921 a scenic Spanish Colonial Revival glazed tile fountain and Mexican Saltillo tile patio was added to Torrance High's Mediterranean Revival style Main Building, along with the attached 'L wing' expansion. The patio area is frequently seen in Beverly Hills, 90210, has been known for decades as the "Senior Patio," and is traditionally off-limits to underclassmen. The seniors of the class of 1975 never had access to the patio which was under renovation during their entire senior year. The Main Building received a major exterior restoration and interior modernization in the late 1970s and is the campus building most often seen on film.

The Long Beach earthquake (magnitude 6.4) on March 10, 1933, left its mark on the campus. The quake destroyed the upper part of the original auditorium and caused the ground near it to sink several feet. The area was nicknamed the "Sunken Garden" until rebuilt. The landmark auditorium replacing it was built in 1937 as a Works Progress Administration project while the elevated administrative offices were added in 1962.[6]

The Ted T. Tanouye Memorial is located directly across from THS. Tanouye, class of 1938, was a technical sergeant in the US Army's 442nd Regimental Combat Team who was awarded the Medal of Honor posthumously. The memorial was dedicated in 2004 on the 60th anniversary of the Tanouye's heroic acts during World War II.

Torrance High's unique architecture and relative proximity to Hollywood Studios make it an ideal filming location for major television programs and motion pictures. Its credits include: 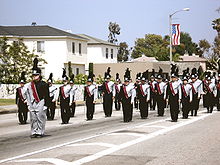 Torrance High has had a long successful athletic history winning many league titles in the current Pioneer League and also in the past Bay League.

As an unofficial tradition, Torrance High has been known for many of its graduates enlisting with the U.S. military, particularly the Marine Corps.[citation needed] Many alumni have gone on to become professional players, some before they even graduated. Deon Thompson graduated in 2006, and went on to play Basketball for UNC as a Forward.[10] Angela Park became a professional golfer in April before her graduation in 2006,[11] and went on to tie for second place in the LPGA US Women's Open of 2007.[12] Angela would earn the 2007 LPGA Rookie of the Year Award. Jenny Shin, Class of 2010, has competed on the LPGA Tour since 2011 and won the 2016 LPGA Volunteers of America Texas Shootout along with 22 career top 10 LPGA finishes.

Student groups are a significant[citation needed] part of student life, with service clubs like UNICEF and KIWIN'S, and academic groups such as Model United Nations and United States Academic Decathlon serving many interests. Cultural clubs are also available for students interested in another nationality's culture. The largest clubs at Torrance High by average attendance are CSF, Kiwins, UNICEF, Bible Club, KCC (Korean Culture Club), KFCC (Filipino Club) all averaging between 50-100 students each month.

View of the THS main campus: the Science Building and two refurbished greenhouses on the right; the Band room and WPA Auditorium on the left.

The school's alma mater is set to the ballad "Annie Lisle." 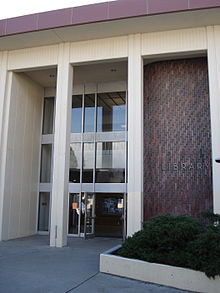 The Torrance High Library is on the first floor, with multimedia classrooms up on the second level.

In 2004, Torrance High instated its Schoolwide Academic Goals in an effort to raise its education standards. Comprising an acronym of the mascot's name, they outline goals of technical competency and other standards.[13] Every year, about 50% of the seniors attend community colleges after graduating.