listen) tuu-LAIR-ee) is a county in the U.S. state of California. As of the 2020 census, the population was 473,117.[6] The county seat is Visalia.[7] The county is named for Tulare Lake, once the largest freshwater lake west of the Great Lakes. Drained for agricultural development, the site is now in Kings County, which was created in 1893 from the western portion of the formerly larger Tulare County.

Sequoia National Park is located in the county, as is part of Kings Canyon National Park, in its northeast corner (shared with Fresno County), and part of Mount Whitney, on its eastern border (shared with Inyo County). As of the 2020 census, the population was 473,117, up from 442,179 at the 2010 census. 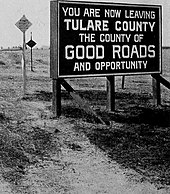 The land was occupied for thousands of years by the Yokuts. Beginning in the eighteenth century, Spain established missions to colonize California and convert the American Indians to Christianity. Comandante Pedro Fages, while hunting for deserters in the Central Valley in 1772, discovered a great lake surrounded by marshes and filled with rushes; he named it Los Tules (the tules). It is from this lake that the county derives its name. The root of the name Tulare is found in the Nahuatl word tullin, designating cattail or similar reeds.

In 1805, 1806 and again in 1816, the Spanish out of Mission San Luis Obispo explored Lake Tulare.[8] Bubal was a native village located on the Western side of Lake Tulare. In 1816, Fr. Luis Martinez of Mission San Luis Obispo arrived at Bubal with soldiers and armed Christian Northern Chumash pressuring the people to send their children for baptism at his mission on the coast. Conflict broke out, and Martinez's party burned Bubal to the ground, destroying the cache of food harvested for the winter.[9] Although Bubal's relationship with the Christian Salinans under Fr. Cabot at Mission San Miguel was better, between 1816 and 1834, Bubal was a center of native resistance. The marshes around Lake Tulare were impenetrable by Spanish horses, which gave the Yokuts a military advantage. At one point, the Spanish considered building a presidio with 100 soldiers at Bubal to control the resistance, but that never came to pass. The Spanish called the natives of the area Tulareños, and before 1816 and after 1834, they were incorporated into Mission San Miguel and Mission San Luis Obispo.[9]

After Mexico achieved independence, it continued to rule California. After the Mexican Cession and the Treaty of Guadalupe Hidalgo in 1848, the area became part of the United States. Tulare County was soon formed from parts of Mariposa County only four years later in 1852. There were two early attempts to split off a new Buena Vista County in 1855 and Coso County in 1864, but both failed. Parts of the county's territory were given to Fresno County in 1856, to Kern County and Inyo County in 1866 and to Kings County in 1893.

The infectious disease Tularemia caused by the bacterium Francisella tularensis is named after Tulare County.

In 1908 Colonel Allen Allensworth and associates founded Allensworth as a black farming community. They intended to develop a place where African Americans could thrive free of white discrimination. It was the only community in California founded, financed and governed by African Americans. While its first years were highly successful, the community encountered environmental problems from dropping water tables which eventually caused it to fail. Today the historic area is preserved as the Colonel Allensworth State Historic Park, which is listed on the National Register of Historic Places.

Mount Whitney is located on the Tulare–Inyo county line. 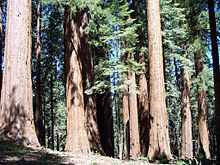 Sequoia National Park is a national park in the southern Sierra Nevada, east of Visalia. It was established in 1890 as the second U.S. national park, after Yellowstone. The park spans 404,051 acres (1,635.14 km2). Encompassing a vertical relief of nearly 13,000 feet (3,962 m), the park contains among its natural resources the highest point in the contiguous 48 United States, Mount Whitney, at 14,505 feet (4,421 m) above sea level. The park is south of and contiguous with Kings Canyon National Park; the two are administered by the National Park Service as one unit, called Sequoia and Kings Canyon National Parks.

The Tulare County Sheriff provides court protection, county jail operation, patrol and detective functions in the unincorporated areas of the county. Incorporated towns have municipal police departments or contract with the Sheriff for their police operations.

The cities of Tulare, Porterville, and Visalia have their own local intracity bus services.

The Porterville Municipal Airport, located 3 nautical miles (3.5 mi; 5.6 km) from Downtown Porterville, has very limited commercial passenger service with WestAir. The airport offers general aviation to the public; it is also home to Porterville Air Attack Base on the south part of the airport. The Visalia Municipal Airport is a city-owned airport for the city of Visalia, California. Mefford Field is a city-owned general aviation airport located in Tulare.

The nearest full-operation commercial airports are Bakersfield's Meadows Field Airport to the south, and Fresno's Fresno Yosemite International Airport to the north.

The following table includes the number of incidents reported and the rate per 1,000 persons for each type of offense, as of 2019.

(reported by the sheriff's office or county police)[34]

According to the United States Census Bureau, Tulare County is the 7th largest county in California by total area.[12]

In the United States House of Representatives, Tulare County is split between three congressional districts:[40]

In the California State Senate, it is split between three legislative districts:[42]

The dairy industry, with sales of milk products, brings in the most revenue for the county, typically more than US$1 billion a year annually. Oranges, grapes, and cattle-related commodities also earn hundreds of millions of dollars annually.

In 2001, Tulare became the most productive county in the U.S. in terms of agricultural revenues, at US$3.5 billion annually. It surpassed Fresno County's US$3.2 billion, which had held the top spot for over two decades. Due to the importance of agriculture in the county as well as its location in the state, since 1968 the city of Tulare has been the site of the annual World Ag Expo,[44] the world's largest agricultural exposition.

Minor league sports teams, such as the baseball Visalia Rawhide of the class-A level California League (an affiliate to the Arizona Diamondbacks), two teams of the Minor League Football Association in Tulare and Visalia, and four teams of the Central California Basketball League based in Porterville, attract many residents and add to the amenities in the county.[citation needed]

According to the county's 2020 Comprehensive Annual Financial Report,[45] the top employers in the county are:

The population ranking of the following table is based on the 2020 census of Tulare County.[46]