U.S. Route 66 (US 66, Route 66) is a part of a former United States Numbered Highway in the state of California that ran from the west in Santa Monica on the Pacific Ocean through Los Angeles and San Bernardino to Needles at the Arizona state line. It was truncated during the 1964 renumbering and its signage removed in 1974. The highway is now mostly replaced with several streets in Los Angeles, State Route 2 (SR 2), SR 110, SR 66, San Bernardino County Route 66 (CR 66), Interstate 15 (I-15), and I-40.

US 66 was assigned by the American Association of State Highway Officials in November 1926 and signed in 1928 by the Automobile Club of Southern California; however historic US 66 shields and even present day US 66 shields remain.[citation needed] US 66 continued to be signed east of Pasadena until 1974, when it was removed, and the remaining separate section became SR 66.

In 1977, "Hotel California" alluded to Route 66 in its opening lines, "On a dark desert highway, cool wind in my hair, Warm smell of colitas rising up through the air, Up ahead in the distance, I saw a shimmering light, My head grew heavy and my sight grew dim, I had to stop for the night". According to Eagles guitarist Don Felder, "Everybody had driven into Los Angeles on what used to be Route 66. And as you drive in through the desert at night, you can see the glow of Los Angeles from a hundred miles away. The closer and closer you get, you start seeing all of these images, and these things pounded into our heads: the stars on Hollywood Boulevard, movie stars, palm trees, beaches and girls in bikinis."[3]

Nationally, Route 66 has been a decommissioned highway since 1985, with the last section through Williams, Arizona, bypassed by I-40 in 1984. The first efforts to return the route to maps as "Historic Route 66" date to 1987 and Angel Delgadillo's Arizona Historic Route 66 Association. This initiative was soon followed in all eight US 66 states, including California.

Because the sections of historic Route 66 that are within urban Los Angeles (San Bernardino to Santa Monica) are still dedicated streets, they remain as the most used and heavily traveled Route 66 segments. However, because of the heavy traffic and later non-historic development along these sections, they are generally the least traveled by Route 66 enthusiasts. Modern guide books that describe how to follow historic Route 66 frequently suggest that when arriving at San Bernardino from the east, enthusiasts should enter Interstate 10 as a bypass for these segments exiting near Santa Monica to experience today's terminus.

In 2018, U.S. Bicycle Route 66 was established that follows portions of historic Route 66 within California and other areas in the country.

From San Bernardino to the Arizona state line US 66 followed the old National Old Trails Highway. The old highway veers away from I-15 between Victorville and Barstow, following the railroad through Oro Grande, Helendale, and Lenwood. Through Barstow, it is Main Street. East of Barstow, the National Old Trails Highway passes through a Marine Corps base, limiting public access and forcing traffic onto I-40. From Daggett, Historic 66 leaves I-40, crossing it three times before winding away through Bagdad, Amboy, and Essex. US 66 was all paved in California by 1935.

This area is desert; towns like Amboy originated as Atlantic and Pacific Railroad stops and were sustained by Route 66 traffic during the Mother Road's heyday, then became ghost towns when I-40 bypassed them to the north. From Essex the highway was Goffs Road through Goffs until about 1931, joining I-40 at the US 95 exit. The later alignment is now I-40 east of Essex. The original highway winds around I-40 in the Needles area, before crossing the Colorado River into Arizona.

The original western terminus of Route 66 was in downtown Los Angeles at the intersection of 7th street and Broadway Ave.[4] In 1935, the route was extended to Santa Monica.[5] In Santa Monica, US 66 started at the intersection of Lincoln and Olympic Blvd at U.S. 101A. Route 66 headed north on Lincoln and then turned east onto Santa Monica Blvd. which was, from the Santa Monica city line with Los Angeles up to US 101, added to SR 2 during the 1964 renumbering, the same name it had before 1936.[6] In today's terms, it followed Santa Monica Boulevard until the east end, where it continued to the southeast as Sunset Boulevard up to SR 110 (Arroyo Seco Parkway), at the interchange with US 101. 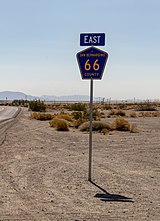 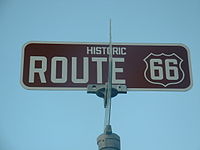 US 66 originally exited San Bernardino on Mount Vernon Avenue and Cajon Boulevard, which meandered its way up to Cajon Pass. US 66 originally followed 7th Street and D Street through Victorville then the National Old Trails Highway through Barstow, California (where it took on the name "Main Street") and across the Mojave Desert to Needles. US 66 followed Broadway Street through Needles, then crossed into Arizona on the Trails Arch Bridge (1916-1946) or the Red Rock Bridge (converted from railroad bridge in 1946, abandoned 1966, dismantled 1976). 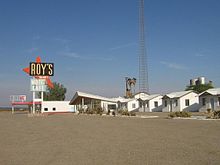 Roy's in the Mojave Desert at Amboy

Roy's Motel and Café was once the largest roadside business in what is now the desert ghost town of Amboy, California. The motel has been closed for years as the town died when Interstate 40 in California diverted traffic ten miles further north. Amboy, as a ghost town, had been used as a filming location for various movies. More recently, the Roy's filling station and café have operated at least sporadically in an attempt to preserve this landmark for tourism.

The Summit Inn, a diner and filling station originally located in 1928 at the summit of the Cajon Pass, moved to Oak Hills, California when the highway was re-routed in 1952. Its visitors include Elvis Presley, reported to have kicked the jukebox and left without dining after finding none of his own records among the available selections. The building was destroyed by the Blue Cut Fire on August 16, 2016.[8] The building's current owners plan to rebuild the restaurant, as it appeared before the fire.[9] 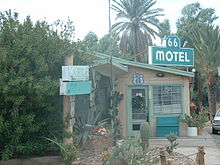 Route 66 has attracted campers since the Great Depression era, where The Grapes of Wrath describes a large but primitive riverside campground as one of the first sights when arriving in Needles, California from Arizona. Needles later became the site of the Carty's Camp cabins seen briefly in John Ford's 1940 film version of "The Grapes of Wrath" (now a deteriorating ghost tourist court) and the later adjacent 66 Motel (which currently offers long-term rental only).

The 1924 Aztec Hotel in Monrovia, a National Historic Landmark in the San Gabriel Valley, is notable for its Mayan Revival architecture.

One of three restored Wigwam Motels accommodates motorists in San Bernardino near Rialto. Based on a once-patented novelty architecture, these are tourist courts in which each cabin is a free-standing concrete wigwam. This group of motels served as an inspiration for the Cozy Cone Motel in Cars (film).

California devotes a pair of museums to the history of old Route 66, the California Route 66 Museum in the former Red Rooster Café in Victorville and the Barstow Route 66 "Mother Road" Museum in the town's former Harvey House Railroad Depot.

The Figueroa Street Tunnels carry the Arroyo Seco Parkway through Elysian Park in Los Angeles; a Four Level Interchange connecting the Hollywood Freeway (Route 101) to Route 66 was the first stack interchange in the world.

The historic 1916 Trails Arch Bridge spanning the Colorado River from Topock, Arizona to Needles, California still stands but is no longer open to traffic as the roadbed has since been removed to carry a natural gas pipeline.