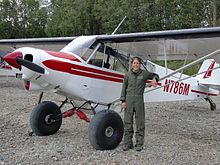 Among the responsibilities of the USFWS are enforcing federal wildlife laws; protecting endangered species; managing migratory birds; restoring nationally significant fisheries; conserving and restoring wildlife habitats, such as wetlands; helping foreign governments in international conservation efforts; and distributing money to fish and wildlife agencies of U.S. states through the Wildlife Sport Fish and Restoration Program.[10] The vast majority of fish and wildlife habitats are on state or private land not controlled by the United States government. Therefore, the USFWS works closely with private groups such as Partners in Flight and the Sport Fishing and Boating Partnership Council to promote voluntary habitat conservation and restoration.

The Agency's directorship currently is vacant after Aurelia Skipwith, the agency's former director, left her post on January 19, 2021.[11][12][13] President Joe Biden has appointed Martha Williams, former director of the Montana Department of Fish, Wildlife and Parks, to be the Principal Deputy Director, Fish and Wildlife Service.[14]

The USFWS employs approximately 8,000 people[1] and is organized into a central administrative office in Falls Church, Virginia, eight regional offices, and nearly 700 field offices distributed throughout the United States.

The USFWS manages the National Wildlife Refuge System, which consists of 560 National Wildlife Refuges, encompassing a full range of habitat types, including wetlands, prairies, coastal and marine areas, and temperate, tundra, and boreal forests spread across all 50 U.S. states. It also manages thousands of small wetlands and other special management areas covering over 150,000,000 acres (61,000,000 ha).

The USFWS shares the responsibility for administering the Endangered Species Act of 1973 with the National Marine Fisheries Service (NMFS), an element of NOAA, with the NMFS responsible for marine species, the FWS responsible for freshwater fish and all other species, and the two organizations jointly managing species that occur in both marine and non-marine environments. The USFWS publishes the quarterly Endangered Species Bulletin.

The USFWS's Fisheries Program oversees the National Fish Hatchery System (NFHS), which includes 70 National Fish Hatcheries and 65 Fish and Wildlife Conservation Offices. Originally created to reverse declines in lake and coastal fish stocks in the United States, the NFHS subsequently expanded its mission to include the preservation of the genes of wild and hatchery-raised fish; the restoration of native aquatic populations of fish, freshwater mussels, and amphibians including populations of species listed under the Endangered Species Act; mitigating the loss of fisheries resulting from U.S. Government water projects; and providing fish to benefit Native Americans and National Wildlife Refuges. The NFHS also engages in outreach, education, and research activities.

The Division of Migratory Bird Management runs the Migratory Bird Program, which works with partners of the USFWS to protect, restore, and conserve bird populations and their habitats by ensuring the long-term ecological sustainability of all migratory bird populations, increasing the socioeconomic benefit of birds, improving the experience of hunting, bird watching, and other outdoor activities related to birds, and increasing the awareness of the aesthetic, ecological, recreational and economic significance of migratory birds and their habitats.[16] It conducts surveys; coordinates USFWS activities with those of public-private bird conservation partnerships; provides matching grants for conservation efforts involving USFWS partners; develops policies and regulations and administers conservation laws related to migratory birds; issues permits to allow individuals and organizations to participate in migratory bird conservation efforts; helps educate and engage children in wildlife conservation topics; and provides resources for parents and educators to assist them in helping children explore nature and birds.[16]

The USFWS partners with the Landscape Conservation Cooperatives, a network of 22 autonomous cooperatives sponsored by the Department of the Interior which function as regional conservation bodies covering the entire United States and adjacent areas.[17]

The USFWS operates the Clark R. Bavin National Fish and Wildlife Forensic Laboratory, the only forensics laboratory in the world devoted to wildlife law enforcement. By treaty, it also is the official crime laboratory for the Convention on International Trade in Endangered Species of Wild Fauna and Flora (CITES) and the Wildlife Group of Interpol. The laboratory identifies the species or subspecies of pieces, parts, or products of an animal to determine its cause of death, help wildlife officers determine if a violation of law occurred in its death, and to identify and compare physical evidence to link suspects to the crime scene and the animal's death.

The USFWS International Affairs Program coordinates domestic and international efforts to protect, restore, and enhance wildlife and its habitats, focusing on species of international concern, fulfilling the USFWS's international responsibilities under about 40 treaties, as well as U.S. laws and regulations. It oversees programs which work with private citizens, local communities, other U.S. Government and U.S. state agencies, foreign governments, non-governmental organizations, scientific and conservation organizations, industry groups. and other interested parties on issues related to the implementation of treaties and laws and the conservation of species around the world.[19]

The USFWS's National Conservation Training Center trains USFWS employees and those of USFWS partners in the accomplishment of the USFWS’s mission.[20]

Pursuant to the eagle feather law, Title 50, Part 22 of the Code of Federal Regulations (50 CFR 22), and the Bald and Golden Eagle Protection Act, the USFWS administers the National Eagle Repository and the permit system for Native American religious use of eagle feathers.[21][22][23] These exceptions often only apply to Native Americans that are registered with the federal government and are enrolled with a federally recognized tribe.

In the late 1990s and early 2000s, the USFWS began to incorporate the research of tribal scientists into conservation decisions.[24] This came on the heels of Native American traditional ecological knowledge (TEK) gaining acceptance in the scientific community as a reasonable and respectable way to gain knowledge of managing the natural world.[25][26] Additionally, other natural resource agencies within the United States government, such as the United States Department of Agriculture, have taken steps to be more inclusive of tribes, native people, and tribal rights.[27] This has marked a transition to a relationship of more co-operation rather than the tension between tribes and government agencies seen historically. Today, these agencies work closely with tribal governments to ensure the best conservation decisions are made and that tribes retain their sovereignty.[28][29]

Fish Commission and Bureau of Fisheries

The other ancestor of the USFWS began as the Section of Economic Ornithology, which was established within the United States Department of Agriculture in 1885 and became the Division of Economic Ornithology and Mammalogy in 1886.[37] In 1896 it became the Division of Biological Survey. Its early work focused on the effect of birds in controlling agricultural pests and mapping the geographical distribution of plants and animals in the United States. Clinton Hart Merriam headed the Bureau for 25 years and became a national figure for improving the scientific understanding of birds and mammals in the United States. In 1934, the Division was reorganized as the Bureau of Biological Survey and Jay Norwood Darling was appointed its chief; the same year, Congress passed the Fish and Wildlife Coordination Act (FWCA), one of the oldest federal environmental review statutes.[38] Under Darling's guidance, the Bureau began an ongoing legacy of protecting vital natural habitat throughout the United States. In 1939, the Bureau of Biological Survey moved from the Department of Agriculture to the Department of the Interior.

FWS patrol vehicles in the Territory of Alaska in 1950

Upon the formation of the National Oceanic and Atmospheric Administration (NOAA) within the Department of Commerce on October 3, 1970, the Bureau of Commercial Fisheries merged with the saltwater laboratories of the Bureau of Sport Fisheries and Wildlife to form today's National Marine Fisheries Service (NMFS), an element of NOAA.[40] The remainder of the USFWS remained in place in the Department of the Interior as the foundation of the USFWS as it is known today.

From 1940 to 1970, the FWS (from 1956 the USFWS) operated a fleet of seagoing vessels. The fleet included fisheries science research ships, fishery patrol vessels, and cargo liners.

The Fish Commission operated a small fleet of research ships and fish-culture vessels. The Bureau of Fisheries inherited these in 1903, and then greatly expanded its fleet of seagoing vessels, including both patrol vessels for fishery enforcement in the Territory of Alaska[34] and a cargo liner — known as the "Pribilof tender" — to provide transportation for passengers and haul cargo to, from, and between the Pribilof Islands.[35] In the 1930s, the Bureau of Biological Survey operated a vessel of its own, Brown Bear. Upon its creation in 1940, the FWS inherited the BOF’s fleet and Brown Bear.

By 1940, no fisheries research vessels remained in commission, the BOF having decommissioned the last one, USFS Albatross II, in 1932;[41] only in the late 1940s did the FWS begin to commission new research ships. Although between 1871 and 1940 the Fish Commission and BOF had never had more than three fisheries research ships in commission at the same time[42] — and had three in commission simultaneously only in two years out of their entire combined history[42] — by March 1950, the FWS feet included 11 seagoing fisheries research and exploratory fishing vessels either in service or under construction,[42] and its fishery enforcement force in the Territory of Alaska included 29 patrol vessels and about 100 speedboats, as well as 20 airplanes.[43] In the 1956 reorganization that created the USFWS, the Bureau of Commercial Fisheries (BCF) assumed the responsibility within the USFWS for the operation of the seagoing vessels of the fleet.

The USFWS continued fishery enforcement in Alaska until after Alaska became a state in January 1959, but by 1960 had turned over enforcement responsibilities and some of the associated vessels to the Government of Alaska as the latter assumed the responsibility for fishery enforcement in its waters.[39] The USFWS continued to operate fisheries research ships and the Pribilof tender until the BCF’s seagoing fleet was transferred to the National Marine Fisheries Service (NMFS), an element of NOAA, upon the creation of NOAA on October 3, 1970. Although the NMFS continued to operate the Pribilof tender until 1975,[44] the rest of the ships were transferred from the NMFS to a unified NOAA fleet during 1972 and 1973. The modern NOAA fleet therefore traces its ancestry in part to the USFWS fleet operated by the BCF. 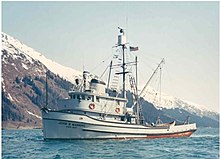 Both before and after the FWS became the USFWS in 1956, ships of its fleet used the prefix “US FWS” while in commission. Although the BOF usually named its ships after aquatic birds and ships the FWS inherited from the BOF retained those names in FWS service, the FWS usually named vessels it acquired after people who were notable in the history of fisheries and fisheries science. A partial list of ships of the FWS and USFWS fleet:

In 1959, the methods used by USFWS's Animal Damage Control Program were featured in the Tom Lehrer song "Poisoning Pigeons in the Park."[45]

1. ^ USFWS headquarters has a Falls Church, Virginia, US mailing address.[3]