The Victory ship was a class of cargo ship produced in large numbers by North American shipyards during World War II to replace losses caused by German submarines. They were a more modern design compared to the earlier Liberty ship, were slightly larger and had more powerful steam turbine engines giving higher speed to allow participation in high speed convoys and make them more difficult targets for German U-boats. A total of 531 Victory ships were built in between 1944 and 1946.[3][4] 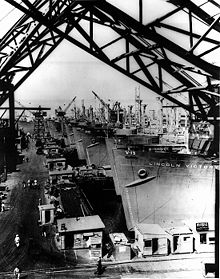 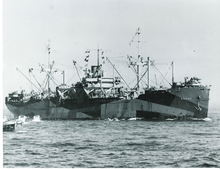 One of the first acts of the United States War Shipping Administration upon its formation in February 1942 was to commission the design of what came to be known as the Victory class. Initially designated EC2-S-AP1, where EC2 = Emergency Cargo, type 2 (Load Waterline Length between 400 and 450 feet (120 and 140 m)), S = steam propulsion with AP1 = one aft propeller (EC2-S-C1 had been the designation of the Liberty ship design), it was changed to VC2-S-AP1 before the name "Victory Ship" was officially adopted on 28 April 1943. The ships were built under the Emergency Shipbuilding program.[2]

The design was an enhancement of the Liberty ship, which had been successfully produced in extraordinary numbers. Victory ships were slightly larger than Liberty ships, 14 feet (4.3 m) longer at 455 feet (139 m), 6 feet (1.8 m) wider at 62 ft (19 m), and drawing one foot more at 28 feet (8.5 m) loaded.[2] Displacement was up just under 1,000 tons, to 15,200. With a raised forecastle and a more sophisticated hull shape to help achieve the higher speed, they had a quite different appearance from Liberty ships.

To make them less vulnerable to U-boat attacks, Victory ships made 15 to 17 knots (28 to 31 km/h), 4 to 6 knots (7.4 to 11.1 km/h) faster than the Libertys, and had longer range. The extra speed was achieved through more modern, efficient engines. Rather than the Libertys' 2,500 horsepower (1,900 kW) triple expansion steam engines, Victory ships were designed to use either Lentz type reciprocating steam engines (one ship only, oil fired), Diesel engines (one ship) or steam turbines (the rest, all oil fired) (variously putting out between 6,000 and 8,500 hp (4,500 and 6,300 kW)). Another improvement was electrically powered auxiliary equipment, rather than steam-driven machinery.

To prevent the hull cracks that many Liberty ships developed—making some break in half—the spacing between frames was widened from 30 inches (760 mm) to 36 inches (910 mm), making the ships less stiff and more able to flex. Like Liberty ships, the hull was welded rather than riveted.[5]

The VC2-S-AP2, VC2-S-AP3, and VC2-M-AP4 were armed with a 5-inch (127 mm)/38 caliber stern gun for use against submarines and surface ships, and a bow-mounted 3-inch (76 mm)/50 caliber gun and eight 20 mm cannon for use against aircraft. These were manned by United States Navy Armed Guard personnel. The VC2-S-AP5 Haskell-class attack transports were armed with the 5-inch stern gun, one quad 40 mm Bofors cannon, four dual 40 mm Bofors cannon, and ten single 20 mm cannon. The Haskells were operated and crewed exclusively by U.S. Navy personnel.

Model of a Victory ship's superstructure and center cranes. The engine room is located below the superstructure. This model is on display at the American Merchant Marine Museum in Kings Point, New York.

The first vessel was SS United Victory launched at Oregon Shipbuilding Corporation on 12 January 1944 and completed on 28 February 1944, making her maiden voyage a month later. American vessels frequently had a name incorporating the word "Victory".[8] After United Victory, the next 34 vessels were named after allied countries, the following 218 after American cities, the next 150 after educational institutions and the remainder given miscellaneous names. The AP5 type attack transports were named after United States counties, without "Victory" in their name, with the exception of USS Marvin H. McIntyre, which was named after President Roosevelt's late personal secretary.

Although initial deliveries were slow—only 15 had been delivered by May 1944—by the end of the war 531 had been constructed. The Commission cancelled orders for a further 132 vessels, although three were completed in 1946 for the Alcoa Steamship Company, making a total built in the United States of 534, made up of: 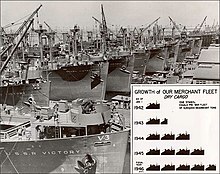 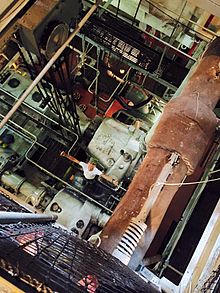 Of the wartime construction, 414 were of the standard cargo variant and 117 were attack transports.[2] Because the Atlantic battle had been won by the time the first of the Victory ships appeared none were sunk by U-boats. Three were sunk by Japanese kamikaze attack in April 1945.

Some 36 Victory ships continued in service and served in the Korean War and a 100 Victory ships served in the Vietnam War. Many were sold and became commercial cargo ships and a few commercial passenger ships. Some were laid up in the United States Navy reserve fleets and then scrapped or reused. Many saw postwar conversion and various uses for years afterward. The single VC2-M-AP4 Diesel-powered Emory Victory operated in Alaskan waters for the Bureau of Indian Affairs as North Star III.[2] AP3 types South Bend Victory and Tuskegee Victory were converted in 1957–58 to ocean hydrographic surveying ships USNS Bowditch and Dutton, respectively.[2] Dutton aided in locating the lost hydrogen bomb following the 1966 Palomares B-52 crash.[15]

Starting in 1959, several were removed from the reserve fleet and refitted for the National Aeronautics and Space Administration. One such ship was SS Kingsport Victory, which was renamed USNS Kingsport and converted into the world's first satellite communications ship. Another was the former Haiti Victory, which recovered the first man-made object to return from orbit, the nose cone of Discoverer 13, on 11 August 1960. USS Sherburne was converted in 1969–1970 to the range instrumentation ship USNS Range Sentinel for downrange tracking of ballistic missile tests.[2]

In the 1960s two Victory ships were reactivated and converted to technical research ships by the U.S. Navy with the hull type AGTR. SS Iran Victory became USS Belmont and SS Simmons Victory became USS Liberty. Liberty was attacked and severely damaged by Israeli forces in June 1967 and subsequently decommissioned and struck from the Naval Register. Belmont was decommissioned and stricken in 1970. Baton Rouge Victory was sunk in the Mekong delta by a Viet Cong mine in August 1966 and temporarily blocked the channel to Saigon.[2]

Most Victory ships were constructed in six West Coast and one Baltimore emergency shipyards that were set up in World War II to build Liberty, Victory, and other ships. The Victory ship was designed to be able to be assembled by the smallest capacity crane at these shipyards.[2] 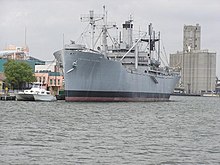 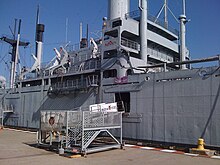 Three are preserved as museum ships: