West Covina is a suburban city in Los Angeles County, California, located 19 miles (31 km) east of Downtown Los Angeles in the eastern San Gabriel Valley and is part of Greater Los Angeles. The population for the city was 109,501 at the 2020 census.

West Covina was incorporated as an independent city in 1923 to prevent the city of Covina from building a sewage farm in the area. Benjamin Franklin Maxson, Jr., (1897-1928) initiated the incorporation process and was the first mayor. Walnut groves and orange groves continued to flourish. The population in 1930 was 769 and blossomed to 1,549 in 1940. As a result of remarkable expansion during the post World War II building boom, West Covina became one of the fastest-growing U.S. cities between 1950 and 1960, with the population increasing 1,000% from less than 5,000 to more than 50,000 citizens. The decades between 1960 and 2000 demonstrated steady growth, which slowed significantly by the time of the 2010 census.

The City of West Covina began the second half of the 20th century with new developments and projects, mostly brought on by big business. The City Hall and police facility were built in 1969 as the first phase of an example of a Joint Powers Authority in the County of Los Angeles. The Civic Center Joint Powers Authority, consisting of the County of Los Angeles and the City of West Covina, also completed a three-level parking structure in the Civic Center complex. The Civic Center complex includes the Los Angeles County Regional Library and the Citrus Municipal Court building and the city offices.

The first Redevelopment Agency project included a regional shopping center, the West Covina Fashion Plaza, with three major department stores and 150 shops in an air-conditioned, enclosed mall. It also included the revitalization of the older sections of the shopping center. The Fashion Plaza has provided the citizens of the San Gabriel Valley with convenient access to all shopping needs. In 1991 the mall was renovated adding a food court and additional shops, as well as the redecorating of the entire mall. The mall was renamed "The Plaza at West Covina". The Plaza opened a new 100,000 sq ft (9,300 m2). wing in October 1993 featuring 50 new stores including a new Robinson's-May and interior renovation throughout The Plaza.

The Redevelopment Agency's efforts have also resulted in several major office buildings in the city, such as "The Lakes", in addition to two new community shopping centers, freestanding retail developments, restaurants, residential projects, and the Auto Plaza.

West Covina was the shooting for scenes of Mondo Burger and the title role of the restaurant in the 1997 family comedy film, Good Burger, directed by Brian Robbins.

A 2020 ranking of the fiscal health of California cities issued by State Auditor Elaine Howle's office placed West Covina as the ninth-worst in the state [7] The city was also audited by the state the same year, as the state auditor had determined that the city's poor finances put it at high risk for default.[8]

In 2017, there were more than 10,000 Filipino Americans living in West Covina;[12] they make up the majority population in the south side of the city.[13]

West Covina is broken up into five districts.[14]

Mexican and Filipino are the most common ancestries in West Covina.[16] 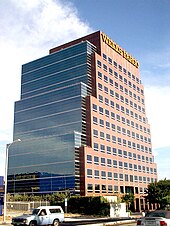 The 14-story 100 N. Barranca Building, tallest in the city

According to the city's 2020 Comprehensive Annual Financial Report,[17] the top employers in the city are:

There are three major shopping centers in West Covina: Plaza West Covina, Eastland Center, and The Heights at West Covina.

The Eastland Center is a power center which has undergone major renovations since it opened in 1957. Eastland is two levels, with parking for the lower level on south side of the center and parking for the upper level on the north side. It has many larger department stores like Burlington Coat Factory, Dick's Sporting Goods, Bed Bath & Beyond, and PetSmart. Eastland Center is anchored by Walmart to the west and by Target (122,000 sq ft (11,300 m2)) to the east.

The Heights at West Covina

The Heights at West Covina is a new 340,000-square-foot (32,000 m2) retail shopping center located just south of Big League Dreams Sports Park. It is anchored by The Home Depot to the north, and Target to the south. The center has many stores and restaurants.

The West Covina Sportsplex is a 315-acre (127 ha) commercial and recreational center opened in 2007. Built on a former landfill, the center includes a sports park, commercial development, and public golf course.[19] 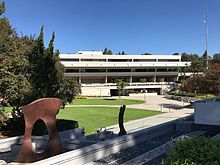 Public schools in West Covina administered by the Covina-Valley Unified School District include:[20]

Public schools in West Covina administered by the Rowland Unified School District include: [21]

West Covina and the San Gabriel Valley are the setting for the US television series Crazy Ex-Girlfriend. It is depicted as being part of the Inland Empire and being "two hours from the beach, four in traffic."[27]

The 1974 US television series Chopper One depicts the activities of a helicopter unit in the West Covina Police Department (as shown by the WCPD uniform patches).