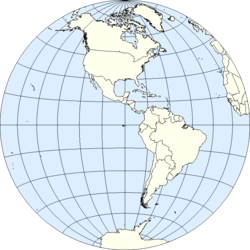 The Western Hemisphere is the half of Earth which lies west of the prime meridian (which crosses Greenwich, London, United Kingdom) and east of the antimeridian.[1][2] The other half is called the Eastern Hemisphere. In geopolitical terms, the context in which the term is most often used, the Encyclopedia Britannica defines it as "North and South America and the surrounding waters. Longitudes 20°W and 160°E are often considered its boundaries."[3] It may be used in a cultural or geopolitical sense as a synonym for the "New World".

In an attempt to define the Western Hemisphere as the parts of the world which are not part of the Old World, there also exist projections which use the 20th meridian west and the diametrically opposed 160th meridian east to define the hemisphere.[1] This projection excludes the European and African mainlands and a small portion of northeast Greenland, but includes more of eastern Russia and Oceania.

Sovereign states in both hemispheres

Below is a list of the sovereign states in both the Western and Eastern hemispheres on the IERS Reference Meridian, in order from north to south:

Below is a list of additional sovereign states which are in both the Western and Eastern hemispheres along the 180th meridian, in order from north to south. (France is not listed below due to its inclusion above, though the meridian does pass Wallis and Futuna.) With the exception of the United States (due to Wake Island, Guam and the Northern Mariana Islands), all of them are located on just one side of the International Date Line, which curves around them.

One sovereign state has territory in both hemispheres, but neither the prime meridian nor the 180th meridian passes through its territory:

Countries, dependencies and other territories in the Western Hemisphere but not in the Americas

The following countries and territories lie outside the Americas yet are entirely, mostly or partially within the Western Hemisphere: