Area of Northern California known as a wine-growing region
This article is about California's Wine Country region. For other uses, see Wine Country (disambiguation).

Wine Country is the region of California, in the northern San Francisco Bay Area, known worldwide as a premier wine-growing region.[1] The region is famed for its wineries, its cuisine,[2] Michelin star restaurants, boutique hotels, luxury resorts, historic architecture,[3] and culture.[4] Viticulture and wine-making have been practiced in the region since the Spanish missionaries from Mission San Francisco Solano established the first vineyards in 1812.

There are over 1700 wineries in the North Bay, (according to Alcoholic Beverage Control of California), mostly located in the area's valleys, including Napa Valley in Napa County, and the Sonoma Valley, Alexander Valley, Dry Creek Valley, Bennett Valley, and Russian River Valley in Sonoma County. Wine grapes are also grown at higher elevations, such as Atlas Peak and Mount Veeder AVAs.[5] Cities and towns associated with the Wine Country include Santa Rosa, Healdsburg, Sonoma, Kenwood, Petaluma, Sebastopol, Guerneville, Windsor, Geyserville, and Cloverdale in Sonoma County; Napa, Yountville, Rutherford, St. Helena and Calistoga in Napa County; and Hopland and Ukiah in Mendocino County. Wine is also becoming an important part of the economy in nearby Lake and Solano Counties: in 2014, Lake County surpassed Mendocino County in price paid per ton of grapes in the North Coast premium market.[6]

Buena Vista Winery, in Sonoma, is the oldest commercial winery in California, founded in 1857. 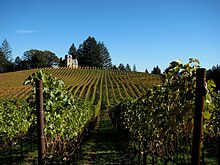 Chateau and vineyards in Napa.

The six-county North Coast AVA overlaps with the Wine Country as defined here and also includes Marin County. In addition, the names of the counties themselves are legal for use as appellation names.[8]

The earliest prehistory of the Wine Country involves habitation by several Native American tribes from approximately 8000 BC.[9] The principal tribes living in this region included the Pomo, Coast Miwok, Wappo and Patwin, whose early peoples practiced certain forms of agriculture, but probably not involving the cultivation of grapes. During the Mexican Colonial period and after, European settlers brought in more intensive agriculture to the Wine Country, including growing grapes and wine production. Some of the historical events that led to the establishment of California as a state transpired in the Wine Country. In particular, the town of Sonoma, is known as the birthplace of American California. Agoston Haraszthy is credited with being one of the forefathers of the California wine industry in Sonoma by his planting of grapes in the lower Arroyo Seco Creek watershed of Sonoma County.[10]

In 2017, many portions of California's Wine Country were heavily devastated by wildfires, including the October 2017 Northern California wildfires.[11]

Vineyard on Sonoma Mountain AVA with background of the Mayacamas Mountains. 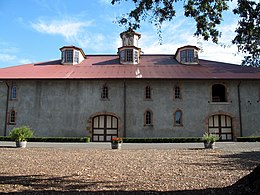 The Charles Krug Winery, founded in 1861, is on the National Register of Historic Places. 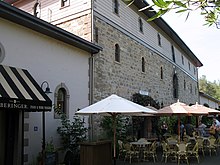 A diversity of aquatic and terrestrial organisms populate the Wine Country and its riparian zones. Winter-run Chinook salmon (Oncorhynchus tsawytscha), Delta smelt (Hypomesus transpacificus) and steelhead (Oncorhynchus mykiss) are the most prominent fishes. Researchers have studied anadromous fish-movements extensively in Sonoma Creek and in the Napa River as well as in the Laguna de Santa Rosa - not only in the mainstems, but in many of the tributaries. These investigations have demonstrated a historical decline in spawning and habitat value for these species, primarily due to sedimentation[12] and secondarily to removal of riparian vegetation since the 19th century.[13]

The Wine Country has undergone a boom in tourism. In 1975 there were only 25 Napa Valley wineries;[18] today there are well over 800 wineries in Napa and Sonoma Counties.[19] Tourists come to the region not only for wine tasting, but also for hiking, bicycling, hot air ballooning, and historic sites, as well as the extensive culinary choices.

Numerous notable chefs and restaurateurs are present in the Wine Country, including Thomas Keller, John Ash, and Sondra Bernstein.[20] Besides the obvious winery attractions, the Wine Country is known for the Sonoma County coastline along the Pacific Ocean, the Russian River valley, redwoods, hot spring baths, petrified forests and other natural areas. 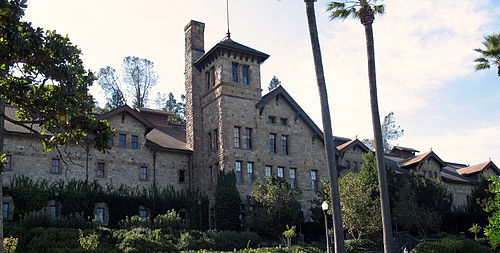 The Culinary Institute of America at Greystone is a prestigious Napa culinary school.

The Wine Country tourism boom has its downside, exemplified by traffic congestion on State Route 29, particularly on summer weekends, when the number of tourists often exceeds the carrying capacity of the road. The Napa Valley is also experiencing pressures for increased urbanization and roadway upgrading.[21] There have also been issues related to regulating home sharing. After a boom in residents renting rooms in private homes, the city government of Napa was forced to require any Napa Airbnb properties to register.[22]