Woodbridge Township is a township in Middlesex County, New Jersey, United States. The township is both a regional hub for Central New Jersey and a major bedroom suburb of New York City in the much larger New York Metropolitan Area, located within the core of the Raritan Valley region. As of the 2010 United States Census, the township had a total population of 99,585,[8][9][10] reflecting an increase of 2,382 (+2.5%) from the 97,203 counted in the 2000 Census, which had in turn increased by 4,117 (+4.4%) from the 93,086 counted in the 1990 Census.[27] Woodbridge was the seventh-most-populous municipality in New Jersey in the 2020 census,[28] after being ranked sixth in 2000 and 2010.[29] Woodbridge hosts the intersection of the New Jersey Turnpike and the Garden State Parkway, the two busiest highways in the state, and also serves as the headquarters for the New Jersey Turnpike Authority.[30]

According to Joshua Coffin, the early settlers included "Captain John Pike, the ancestor of General Zebulon Montgomery Pike, who was killed at the battle of Queenstown in 1813; Thomas Bloomfield, the ancestor of Joseph Bloomfield, some years governor of New Jersey, for whom the township of Bloomfield, New Jersey is named; John Bishop, senior and junior; Jonathan Haynes; Henry Jaques; George March; Stephen Kent; Abraham Toppan, junior; Elisha Ilsley; Hugh March; John Bloomfield; Samuel Moore; Nathaniel Webster; John Ilsley; and others."[31] Woodbridge was the site of the first gristmill in New Jersey.[32][33] The mill was built by Jonathan Singletary Dunham (married to Mary Bloomfield, relative of Joseph Bloomfield).[34][35]

The Township of Woodbridge is the oldest original township in New Jersey and was granted a royal charter on June 1, 1669, by King Charles II of England.[36] It was reincorporated on October 31, 1693. Woodbridge Township was incorporated by the Township Act of 1798 of the New Jersey Legislature on February 21, 1798, as one of the initial 104 townships incorporated in the state under the Township Act. Portions of the township were taken to form Rahway (April 19, 1858), Raritan Township (March 17, 1870, now Edison Township) and Roosevelt (April 11, 1906, now Carteret).[37][38] The township is named after Reverend John W. Woodbridge (1613–1696) of Newbury, Massachusetts, who settled in the future township in 1664.[36][39]

Woodbridge was the site of one of America's deadliest rail accidents on February 6, 1951, when a crowded commuter train derailed with 85 deaths. The victims are memorialized by a pair of historical markers, installed by New Jersey Transit in 2002 and by Woodbridge Township in 2013.[40][41][42]

In October 1982, Woodbridge made national news when, for the first time in the United States, local authorities enacted a measure under which people were banned from using the then-popular Sony Walkman cassette players in public, while riding a bike, crossing the street, or driving a car. Violators could be fined $50 and spend up to 15 days in jail.[43] As of 2022, Section 3–10 of the township code bars the use of earphones and headphones by bicyclists, those driving vehicles and by pedestrians and joggers while on public streets.[44]

The township borders Carteret, Edison, Perth Amboy and Sayreville in Middlesex County; Clark, Linden and Rahway in Union County. Its border with the borough of Staten Island in New York City is in the Arthur Kill.[46][47][48]

The township has a hot-summer humid continental climate (Dfa) similar to most of metropolitan NE New Jersey. This borders a humid subtropical climate (Cfa) in Port Reading near the Arthur Kill. The local hardiness zone is 7a.

As of the 2000 Census, 9.19% of Woodbridge Township's residents identified themselves as being of Indian American ancestry, which was the tenth-highest of any municipality in the United States and the fifth highest in New Jersey—behind Edison (17.75%), Plainsboro Township (16.97%), Piscataway Township (12.49%) and South Brunswick Township (10.48%)—of all places with 1,000 or more residents identifying their ancestry.[76]

Wakefern Food Corporation, owner of ShopRite, has its headquarters in Keasbey in the township.[79][80] Additionally, the township is one of a handful in New Jersey that have authorized the sale of medical cannabis through local dispensaries.[81]

In the center of Woodbridge Heards Brook passes through Heards Brook Park. Described as "the most preferred tourist attraction in Woodbridge," it has a wooded area, picnic tables, tree-lined stone pathways, basketball courts and "stunning views of the brook."[82][83] The Rutgers University floodplain plan is to integrate smaller areas of park land in the eastern portion of Heards Brook into the larger area of open spaces with a bioswale.[84]

In 2013, the Ernest L. Oros Wildlife Preserve was dedicated; the Preserve occupies 99 acres (40 ha) along the Woodbridge River and has restored the river and adjacent land as a nature preserve. Activities include hiking, boating, bird watching, and picnicking.[85] Many bird species have been observed along the river, particularly at the Oros Preserve. Bird sightings include wading birds (great blue herons and great egrets), the bald eagle, belted kingfishers and Canada goose. Eight mammal species have been noted, including raccoon and red fox; nine fish species have been identified, including the American eel. The Preserve has been called "an important hot spot in an otherwise highly developed area."[86] Within the preserve is the Butterfly Garden.[87] Downstream and north of Port Reading Avenue is Woodbridge River Park. It covers 40 acres (16 ha), and has been described as "loaded with channels, backwaters, oxbows and suitable for canoes."[88]

The Middlesex Greenway is a 3.5-mile (5.6 km) long rail trail, a former Lehigh Valley Railroad rail line between Metuchen and Woodbridge. It makes up a portion of the East Coast Greenway.

Merrill Park is a 179 acres (72 ha) park along the banks of the South Branch Rahway River, fully renovated in 2013. It has sports facilities, playgrounds, bike paths and walkways.[89]

James Parker founded the first printing press in New Jersey in 1751; his building has been restored with an old working printing press. It is located in Parker Press Park, Woodbridge Proper; the park has concert series in the summer.[90]

Woodbridge Community Center has a gym, miniature golf course, batting cages, a pool, community rooms, a playground, and also has "The Arenas", which have a roller skating rink with arcade and an ice skating rink.[91][92]

Woodbridge is governed within the Faulkner Act, formally known as the Optional Municipal Charter law, under the Mayor-Council system of municipal government. The township is one of 71 municipalities (of the 565) statewide that use this form of government.[95] The governing body is comprised of a directly elected mayor and a nine-member Township Council, with all officials elected to staggered four-year terms of office on a partisan basis as part of the November general election in odd-numbered years. The council is comprised of four members elected at-large and five members elected from each of the township's five wards. The at-large and mayoral seats come up together for vote followed two years later by the five ward seats.[6] The Township Council is the legislative body of Woodbridge Township.

In January 2022, the Township Council selected Sharon McAuliffe from a list of three candidates submitted by the Democratic municipal committee to fill the First Ward seat expiring in December 2025 that had been held by Nancy Bader-Drumm for a decade until her death earlier that month. McAuliffe will serve on an interim basis until the November 2022 general election, when voters will choose a candidate to serve the balance of the term of office.[102]

In August 2015, the Township Council selected Cory Spillar from a list of three candidates nominated by the Democratic municipal committee to fill the Third Ward seat that had been held by Council President Michele Charmello until her resignation the previous month to take a position in Pittsburgh. The council chose new leadership, promoting Nancy Drumm from vice president to president (to replace Charmello) and Rick Dalina as vice president.[103]

The Woodbridge Township School District serves students in kindergarten through twelfth grade. All schools in the district are accredited by the Middle States Association of Colleges and Schools Commission on Secondary Schools. The district's three high schools offer more than 150 courses, including Advanced Placement, college preparatory, business, vocational and cooperative work/study programs.

The Garden State Parkway extends 7+1⁄2 miles (12.1 km) through the Township, including exits 127 to 131. The Parkway connects Sayreville in the south to Clark in the north.[176] In addition, the New Jersey Turnpike (Interstate 95) passes through Woodbridge Township for about 5+1⁄4 miles (8.4 km), and is accessible at Exit 11 (which features a 24-lane toll gate).[177] The Turnpike's Grover Cleveland service area is located between Interchanges 11 and 12 northbound at milepost 92.9 and the Thomas Edison service area is located between Interchanges 11 and 12 southbound at milepost 92.9.[178]

The 15-lane Driscoll Bridge on the Garden State Parkway and the adjacent 6-lane Edison Bridge on U.S. Route 9 both span the Raritan River, connecting Woodbridge Township on the north with Sayreville on the south.

There are three train stations in the township: Metropark,[180] Avenel[181] and Woodbridge.[182] Service is provided at Metropark by NJ Transit's Northeast Corridor Line[183] and at Avenel and Woodbridge on the North Jersey Coast Line.[184] The Metropark station also offers Amtrak Northeast Corridor services to Newark (Penn Station), New York (Penn Station), Philadelphia, Washington, D.C. and Boston.[185] In September 2019, NJ Transit initiated increased daily service at the Avenel station and announced the resumption of weekend service after more than 20 years.[186] 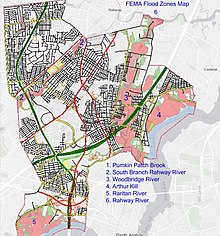 Woodbridge's geographical features make it prone to repeated flooding. It is surrounded by water on three sides, the Arthur Kill, a tidal strait to the east, and tidal rivers to the south, Raritan River, and north, Rahway River; and, much of the developed land in Woodbridge has low elevations, as little as five feet above sea level. About 19% of Woodbridge Township lies within FEMA's flood hazard areas.[188] There is a long history of tidal flooding along the Woodbridge River in Woodbridge Proper, the Raritan in Keasbey and the Arthur Kill in Sewaren and Port Reading.[189] In addition to tidal flooding, fluvial flooding is common. Woodbridge streams and rivers have been described as having a "high flow, flashy nature." The land is relatively impervious, and flooding is exacerbated by steep slopes and urban cover. Flooding in the South Branch Rahway River and Pumpkin Patch Brook hazard zones is predominantly fluvial. Prolonged coastal storms (nor'easters), which combine tidal and fluvial flooding, along with flow constrictions, cause an increase in the duration of flooding of the Woodbridge River and its tributaries, Heards Brook and Wedgewood Brook, which may last for days before water levels subside.[188] Frequency of flooding has increased over time. Sea levels are rising and residential areas have moved into previous marsh land, decreasing the ability of the land to absorb excess water. A 1770 map shows that all land surrounding the Woodbridge River was salt marshes. In October 2012, New Jersey was devastated by Hurricane Sandy[190] and Woodbridge suffered significant flood damage. One of the most affected neighborhoods from Hurricane Sandy was Watson-Cramptom, an area adjacent to the Woodbridge River; prior to 2009 this area was zoned for high density residential housing, including an area of wetlands and meadows.[191] When the Sandy came to this area, it was "characterized as a tsunami-like water wall," destroying adjoining homes.[192] After Sandy, using money from the New Jersey Buyout Program,[193] Woodbridge began buying out and demolishing many residential properties in the flood hazard areas.[194][195] The plan is to restore the Woodbridge flood zones to their original riparian environment.[196] Woodbridge's actions and plans have been called a "slow motion evacuation from climate change." As people move out of flood hazard areas, they will be replaced by a "floodplain forest of native trees, shrubs and grass," to help absorb water from rising sea levels.[197] Despite predictions that flooding will worsen in coming decades as a result of rising sea levels, some property owners have been unwilling to sell, in large part because government programs incentivize these homeowners not to move because the financial risk is mitigated by "emergency" relief in the event of a flood.[198][197]