Riverside County is a county located in the southern portion of the U.S. state of California. As of the 2020 census, the population was 2,418,185,[3] making it the fourth-most populous county in California and the 10th-most populous in the United States. The name was derived from the city of Riverside, which is the county seat.[4]

Roughly rectangular, Riverside County covers 7,208 square miles (18,670 km2) in Southern California, spanning from the greater Los Angeles area to the Arizona border. Geographically, the county is mostly desert in the central and eastern portions, but has a Mediterranean climate in the western portion. Most of Joshua Tree National Park is located in the county. The resort cities of Palm Springs, Palm Desert, Indian Wells, La Quinta, Rancho Mirage, and Desert Hot Springs are all located in the Coachella Valley region of central Riverside County.

Between 2007 and 2011, large numbers of Los Angeles-area workers moved to the county to take advantage of more affordable housing.[5] Along with neighboring San Bernardino County, it was one of the fastest-growing regions in the state prior to the recent changes in the regional economy. In addition, smaller, but significant, numbers of people have been moving into southwest Riverside County from the San Diego metropolitan area.[6][7] The cities of Temecula and Murrieta accounted for 20% of the increase in population of the county between 2000 and 2007.[citation needed]

When Riverside County was formed in 1893 it was named for the city of Riverside, the county seat. The city, founded in 1870, received its name for its location beside the Santa Ana River.[8][9]

The indigenous peoples of what is now Riverside County are the Luiseño, Cupeño and Cahuilla Indians.[10] The Luiseño territory includes the Aguanga and Temecula Basins, Elsinore Trough and eastern Santa Ana Mountains and southward into San Diego County. The Cahuilla territory is to the east and north of the Luiseño in the inland valleys, in the Santa Rosa and San Jacinto Mountains and the desert of the Salton Sink.

The first European settlement in the county was a Mission San Luis Rey de Francia estancia or farm at the Luiseño village of Temescal. In 1819, the Mission granted Leandro Serrano permission to occupy the land for the purpose of grazing and farming, and Serrano established Rancho Temescal. Serrano was mayordomo of San Antonio de Pala Asistencia for the Mission of San Luis Rey.

With the signing of the Treaty of Cordoba in 1821, Mexico gained its independence from Spain, but the San Gabriel Mission near what is now Los Angeles, California, continued to expand, and established Rancho San Gorgonio in 1824. The ranch was to be one of the Mission's principle rancherias, and the most distant, and it occupied most of today's San Gorgonio Pass area.[11][12]

New Mexican colonists founded the town of La Placita on the east side of the Santa Ana River at the northern extremity of what is now the city of Riverside in 1843.

When the initial 27 California counties were established in 1850, the area today known as Riverside County was divided between Los Angeles County and San Diego County. In 1853, the eastern part of Los Angeles County was used to create San Bernardino County. Between 1891 and 1893, several proposals and legislative attempts were put forth to form new counties in Southern California. These proposals included one for a Pomona County and one for a San Jacinto County. None of the proposals were adopted until a measure to create Riverside County was signed by Governor Henry H. Markham on March 11, 1893.[13]

The new county was created from parts of San Bernardino County and San Diego County. On May 2, 1893, seventy percent of voters approved the formation of Riverside County. Voters chose the city of Riverside as the county seat, also by a large margin. Riverside County was officially formed on May 9, 1893, when the Board of Commissioners filed the final canvass of the votes.[13]

The county is also the location of the March Air Reserve Base, one of the oldest airfields continuously operated by the United States military. Established as the Alessandro Flying Training Field in February 1918, it was one of thirty-two U.S. Army Air Service training camps established after the United States entry into World War I in April 1917. The airfield was renamed March Field the following month for 2d Lieutenant Peyton C. March, Jr., the recently deceased son of the then-Army Chief of Staff, General Peyton C. March, who was killed in an air crash in Texas just fifteen days after being commissioned. March Field remained an active Army Air Service, then U.S. Army Air Corps installation throughout the interwar period, later becoming a major installation of the U.S. Army Air Forces during World War II. Renamed March Air Force Base in 1947 following the establishment of the U.S. Air Force, it was a major Strategic Air Command (SAC) installation throughout the Cold War. In 1996, it was transferred to the Air Force Reserve Command and gained its current name as a major base for the Air Force Reserve and the California Air National Guard.[citation needed]

Riverside county was a major focal point of the Civil Rights Movements in the US, especially the African-American sections of Riverside and heavily Mexican-American communities of the Coachella Valley visited by Cesar Chavez of the farm labor union struggle.

Riverside county has also been a focus of modern Native American Gaming enterprises. In the early 1980s, the county government attempted to shut down small bingo halls operated by the Morongo Band of Cahuilla Mission Indians and the Cabazon Band of Mission Indians. The tribes joined forces and fought the county all the way to the U.S. Supreme Court, which ruled in the tribes' favor on February 25, 1987.[14] In turn, Congress enacted the Indian Gaming Regulatory Act in 1988 to establish a legal framework for the relationship between Indian gaming and state governments. Naturally, both tribes now operate large casinos in the county: the Morongo Casino, Resort & Spa and the Fantasy Springs Resort Casino adjacent to Spotlight 29 Casino.

The county's population surpassed one million people in 1990 (year-round, would be 1980 with seasonal residents) when the current trend of high population growth as a major real estate destination began in the 1970s. Once strictly a place for long-distance commuters to L.A. and later Orange County, the county and city of Riverside started becoming more of a place to establish new or relocated offices, corporations and finance centers in the late 1990s and 2000s. More light industry, manufacturing and truck distribution centers became major regional employers in the county.[citation needed]

According to the U.S. Census Bureau, the county has a total area of 7,303 square miles (18,910 km2), of which 7,206 square miles (18,660 km2) is land and 97 square miles (250 km2) (1.3%) is water.[15] It is the fourth-largest county in California by area. At roughly 180 miles (290 km) wide in the east–west dimension, the area of the county is massive. Riverside County, California is roughly the size of the State of New Jersey in total area. County government documents frequently cite the Colorado River town of Blythe as being a "three-hour drive" from the county seat, Riverside. Some view the areas west of San Gorgonio Pass as the Inland Empire portion of the county and the eastern part as either the Mojave Desert or Colorado Desert portion. There are probably at least three geomorphic provinces: the Inland Empire western portion, the Santa Rosa Mountains communities such as Reinhardt Canyon, and the desert region. Other possible subdivisions include tribal lands, the Colorado River communities, and the Salton Sea.

There is a diversity of flora and fauna within Riverside County. Vegetative plant associations feature many desert flora, but there are also forested areas within the county. The California endemic Blue oak, Quercus douglasii is at the southernmost part of its range in Riverside County.[16]

There are 19 official wilderness areas in Riverside County that are part of the National Wilderness Preservation System. Some are integral parts of the above protected areas, most (11 of the 19) are managed solely by the Bureau of Land Management, and some share management between the BLM and the relevant other agencies. Some extend into neighboring counties:

Riverside County is organized as a General Law County under the provision of the California Government Code. The county has five supervisorial districts, and one supervisor is elected from each district every four years.[34] 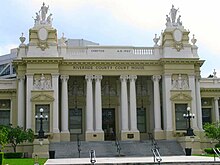 In 1999, the County Board of Supervisors approved a multimillion-dollar planning effort to create the Riverside County Integrated Plan (RCIP) which was to encompass a completely new General Plan, regional transportation plan (CETAP) and Habitat Conservation Plan. The resultant General Plan adopted in 2003 was considered groundbreaking for its multidisciplinary approach to land use and conservation planning.[35][36]

The main courthouse is the Riverside Historic Courthouse. This landmark, erected in 1903, was modeled after the Grand and Petit Palais in Paris, France. The courthouse, designed by Los Angeles architects Burnham and Bliesner, has a classical design – including a great hall that connects all the departments (courtrooms).[38] In 1994, the courthouse was closed for seismic retrofits due to the 1992 Landers and 1994 Northridge earthquakes. The courthouse was reopened and rededicated in September 1998.[39]

Riverside County hands down 1 in 6 death sentences in the US, in spite of it having less than 1% of the population.[40]

The Riverside County Sheriff provides court protection, jail administration, and coroner services for all of Riverside County. It provides patrol, detective, and other police services for the unincorporated areas of the county plus by contract to the cities and towns of Coachella, Eastvale, Indian Wells, Jurupa Valley, La Quinta, Lake Elsinore, Moreno Valley, Norco, Palm Desert, Perris, Rancho Mirage, San Jacinto, Temecula and Wildomar. The Morongo Indian Reservation also contracts with the Sheriff’s Office to provide police services to the reservation.[41]

However, in 2008, consistent with a trend in California and nationwide suburbs towards the Democratic Party,[48] Barack Obama narrowly carried the county with 14,976 votes, a 2.32% margin over Republican John McCain. Obama retained it in 2012 with a plurality, as did Hillary Clinton in 2016, who became the first and only losing Democratic nominee to win the county. Former Democratic Vice President Joe Biden won it in 2020 with a 79,196 lead over then-President Donald Trump, the largest ever raw vote margin for a Democrat.

In the United States House of Representatives, Riverside County is split between 4 congressional districts:[50]

In the California State Senate, the county is split between 3 legislative districts:[51]

In the California State Assembly, the county is split between 7 legislative districts:[52]

Riverside County voted 64.8% in favor of Proposition 8 which amended the California Constitution to ban same-sex marriages. Only the city of Palm Springs voted against the measure.[citation needed] 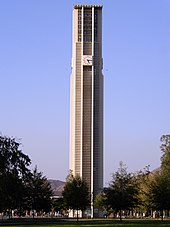 The 161-foot, 48-bell, carillon tower at the University of California, Riverside.

The population ranking of the following table is based on the 2020 census of Riverside County.[78]