Home to Silicon Valley, Santa Clara County is an economic center for high technology and has the third highest GDP per capita in the world (after Zurich, Switzerland and Oslo, Norway), according to the Brookings Institution.[5] The county's concentration of wealth, primarily due to the tech industry, has made it the most affluent county on the West Coast of the United States and the most affluent outside the Washington metropolitan area[6] and one of the most affluent places in the United States.[7][8] 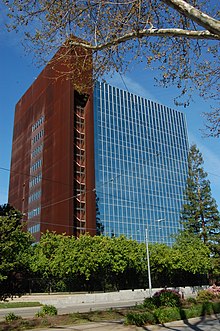 Santa Clara County is named for Mission Santa Clara, which was established in 1777 and was in turn named for Saint Clare of Assisi.

Santa Clara County was one of the original counties of California, formed in 1850 at the time of statehood. The original inhabitants included the Ohlone, residing on Coyote Creek and Calaveras Creek. Part of the county's territory was given to Alameda County in 1853.

In the early 20th Century, the area was promoted as the "Valley of the Heart's Delight" due to its natural beauty, including a significant number of orchards.[9]

The first major technology company to be based in the area was Hewlett-Packard, founded in a garage in Palo Alto in 1939. IBM selected San Jose as its West Coast headquarters in 1943. Varian Associates, Fairchild Semiconductor, and other early innovators were located in the county by the late 1940s and 1950s. The U.S. Navy had a large presence in the area and began giving large contracts to Silicon Valley electronics companies. The term "Silicon Valley" was coined in 1971. The trend accelerated in the 1980s and 1990s, and agriculture has since then been nearly eliminated from the northern part of the county. Today, Santa Clara County is the headquarters for approximately 6500 high technology companies, including many of the largest tech companies in the world, among them hardware manufacturers AMD, Cisco Systems and Intel, computer and consumer electronics companies Apple Inc. and Hewlett-Packard, and internet companies eBay, Google, and Yahoo!. Most of what is considered to be Silicon Valley is located within the county, although some adjoining tech regions in San Mateo (e.g., Facebook), Alameda, and Santa Cruz counties are also considered part of Silicon Valley.

The San Andreas Fault runs along the Santa Cruz Mountains in the south and west of the county. 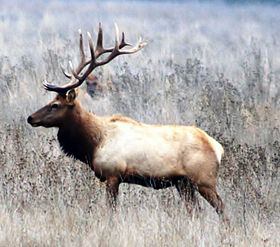 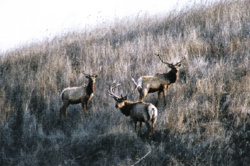 Three tule elk just north of U. S. Highway 101 in Basking Ridge Park. The freeway is a barrier to elk migration to the Coast Range. Courtesy Craige Edgerton

In 1978, California Department of Fish and Game warden Henry Coletto urged the department to choose the Mount Hamilton area as one of California's relocation sites under a new statewide effort to restore tule elk (Cervus canadensis ssp. nannodes). While other ranchers refused, tech pioneers Bill Hewlett and David Packard allowed Coletto and state biologists to translocate the initial 32 tule elk from the Owens Valley in the eastern Sierra onto the 28,000-acre (11,000 ha) San Felipe Ranch, which the families jointly own, in the hills east of Morgan Hill.[11] From the three original 1978–1981 translocations (totaling 65 animals) to the Mount Hamilton region of the Diablo Range, there are multiple herds in different locations including the Isabel Valley, San Antonio Valley, Livermore area, San Felipe Ranch, Metcalf Canyon, Coyote Ridge, Anderson Lake, and surrounding areas such as the Sunol and Cottonwood Creek (near San Luis Reservoir) herds. As of 2012, an estimated 400 tule elk roam 1,875 square kilometres (724 sq mi) in northeastern Santa Clara County and southeastern Alameda County.[12] In March 2014 CDFW translocated nine bull elk from the San Luis National Wildlife Refuge to add genetic diversity to the San Antonio Valley Ecological Reserve herd in San Antonio Valley in extreme eastern Santa Clara County.[13] As of 2017 there were four herds in the Coyote Ridge area, often visible from U. S. Highway 101, according to Craige Edgerton, recently retired executive director of the Silicon Valley Land Conservancy and local naturalist Michael Hundt.[14] In 2019, a fifth herd of tule elk was documented by local naturalist Roger Castillo, likely having split from the Coyote Ridge herd and established itself in Silver Creek Valley around the closed Ranch Golf Club.[15]

Pronghorn (Antilocapra americana) were historically native to Santa Clara County. In June 1776, Lieutenant Commander Don Jose Joaquin Morago led a group of soldiers and colonists from the Presidio of Monterey to establish Mission San Francisco de Asis and found pronghorn: “In the said plains of San Bernardino [Santa Clara Valley]…there is another species of deer about the size of three-year-old sheep. They are similar in appearance to the deer, except that they have short horns and also short legs like the sheep. They live in the plains where they go in herds of 100, 200, or more. They run all together over the plains so fast that they seem to fly…These animals are called berrendos and there are many of them also in the southern Missions wherever the country is level.”[16] In 1990, the California Department of Fish and Game's Henry Coletto translocated excess pronghorn from Modoc County to six locations in California, including 51 animals to the San Felipe Ranch in Santa Clara County, where the swift-footed ungulates had not lived for generations.[17] The animals left the San Felipe Ranch for the Isabel and San Antonio Valleys, as well as an area near Lake Del Valle in Alameda County may now be extirpated by poaching, highway vehicle collisions, and insufficient numbers to defend pronghorn fawns against coyote predation.[18] As of 2012, the Isabel Valley Ranch herd had dwindled to 3 animals, and the Lake del Valle herd to 13.[19] Currently, iNaturalist.org has zero observer records of pronghorn in Santa Clara County.[20]

As of 1980, Santa Clara County has the highest number of Superfund Sites of any county in the United States, accounting for 25 polluted locations requiring a long-term response to clean up hazardous material contaminations.[needs update][23][24] The vast majority of these Superfund sites were caused by firms associated with the high tech sector located in Silicon Valley.[25]

Census demographics data released in 2019 shows that Asian-Americans have had the plurality of Santa Clara's population since 2014.[26]

The largest ancestry groups were:

The county is one among three counties in California (with Napa and Madera) to establish a separate department, the Santa Clara County Department of Corrections, to deal with corrections pursuant to California Government Code §23013.

The county also pays the $340,000 salary and benefits of the California state Department of Social Services director, which is reimbursed by the state, skirting the $165,000 state law cap for the position.[42]

In the United States House of Representatives, Santa Clara County is split between 4 congressional districts:[43]

In the California State Senate, the county is split between 4 legislative districts:[45]

In the California State Assembly, the county is split between 6 legislative districts:[46]

The following table includes the number of incidents reported in 2009 and the rate per 1,000 persons for each type of offense.

The county's economy is heavily service based. Technology, both hardware and software, dominates the service sector by value, but like any other county, Santa Clara has its share of retail and office support workers.

The San Jose/Sunnyvale/Santa Clara metropolitan region, comprising Santa Clara County and San Benito County, was ranked as the highest performing metropolitan area in the US in 2012, ahead of Austin, Texas and Raleigh, North Carolina, according to the Milken Institute.[55] The GDP of the metro area reached $176.7 billion in 2011, or $94,587 per capita,[56] roughly on par with Qatar in both total GDP and per capita (nominal).[57] GDP grew a strong 7.7% in 2011, and in contrast with most of California, GDP and per capita GDP (nominal) is well above 2007 (financial crisis) levels. Despite relative wealth vis a vis other regions nationally, a large underclass exists whose income is roughly equivalent to that elsewhere in the country, despite extreme land prices. The surge in metro GDP is highly correlated with home prices, which for average single-family homes passed $1 million ($1,017,528) in August 2013.[58] 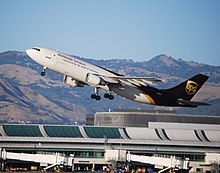 San Jose International Airport is ranked as the best-run airport in the United States, by the ACBJ.[60]

The county's main airport is Norman Y. Mineta San José International Airport (SJC). It is a U.S. Customs and Border Protection port of entry[61] and as of 2019 has five international routes (two to Canada, one to England, one to Japan, seven to Mexico, and one to China) but the airport's busiest routes are all to cities in the western United States. San Francisco International Airport (SFO) is also often used for commercial services by residents of Santa Clara County. 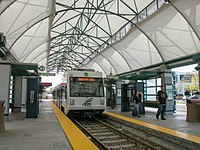 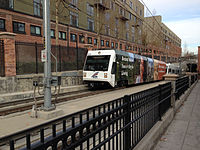 The county has an extensive freeway system and a separate expressway system (though it's not as extensive as those in Southern California). Expressways in California are distinct from freeways; although access to adjoining properties is eliminated, at-grade intersections are allowed. However, unlike expressways virtually everywhere else in California, the Santa Clara County expressways were built, signed, and maintained as county roads; they are not maintained by Caltrans, although they are patrolled by the California Highway Patrol.

There is also a large street network dominated by four- and six-lane arterials. Some of the newer boulevards (primarily in the West Valley) are divided with landscaped medians.

The county has no commercial seaports, although small boats can access San Francisco Bay from several points. Like many other Bay Area counties, it is dependent upon the Port of Oakland for transport of ocean cargo.

Santa Clara County Department of Correction is administered by the county's sheriff's office and supervises the following facilities:

Santa Clara County has an extensive park system, much of it founded in the major park expansion of the late 1970s. Parks within the county include:

To promote friendship and understanding and to build bridges with countries of origin for various ethnic populations in the county, the County of Santa Clara has created a Sister County Commission to coordinate the program. As of 2009, there are three sister counties:[67]

Los Altos is the 3rd most expensive zip code in the United States.[68] 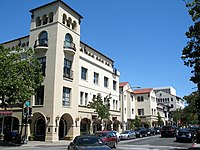 Morgan Hill is the 17th most expensive place to live in the United States.[74]

Los Gatos is the 33rd wealthiest city in the United States.[73]

Saratoga is the 16th most educated and the 8th wealthiest city in the United States.[71][72]

There are 15 incorporated places in Santa Clara County, they are...

The population ranking of the following table is based on the 2010 census of Santa Clara County.[75]