Siskiyou County (/ˈsɪskjuː/ SIS-kew) is a county in the northernmost part of the U.S. state of California. As of the 2010 census, the population was 44,900.[2] Its county seat is Yreka and its highest point is Mount Shasta.[4]

Siskiyou County is in the Shasta Cascade region along with the Oregon border. Because of its outdoor recreation, Mt. Shasta, McCloud River, and Gold Rush era history, it is an important tourist destination within the state.

Siskiyou County was created on March 22, 1852, from parts of Shasta and Klamath Counties, and named after the Siskiyou mountain range. Parts of the county's territory were given to Modoc County in 1855.

The county is the site of the central section of the Siskiyou Trail, which ran between California's Central Valley and the Pacific Northwest. The Siskiyou Trail followed Native American footpaths, and was extended by Hudson's Bay Company trappers in the 1830s. Its length was increased by "Forty-Niners" during the California Gold Rush.

After the discovery of an important gold strike near today's Yreka, California, in 1851, prospectors flooded the area. This was described in detail by Joaquin Miller in his semi-autobiographical novel Life Amongst the Modocs.

In the mid 1880s, the construction of the Central Pacific Railroad along the Siskiyou Trail brought the first wave of tourism. Visitors were drawn by the county's many summer resorts, and to hunt or fish in the largely untouched region. The Southern Pacific railroad, the successor to the Central Pacific, called its rail line “The Road of A Thousand Wonders.”

In the early 1940s, Siskiyou County was home to the semi-serious State of Jefferson movement, which sought to create a new state from several counties of northern California and the adjoining counties of southern Oregon. The movement has seen a revival in recent years.

The origin of the word Siskiyou is not known. It may be Chinook word for a "bob-tailed horse", or as was argued before the State Senate in 1852, from the French Six Cailloux (six stones), a name given to a ford on the Umpqua River by and his Hudson's Bay Company trappers in 1832. Others claim the Six Cailloux name was appropriated by Stephen Meek, another Hudson's Bay Company trapper who discovered Scott Valley, for a crossing on the Klamath River near Hornbrook.

The county is home to the Black Bear Ranch, a commune started in 1968 with the slogan "Free Land for free people."

On September 4, 2013, the Siskiyou County Board of Supervisors voted 4 to 1 to secede from the State of California.[5] 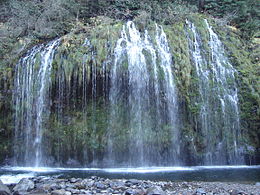 Siskiyou County is geographically diverse. From towering Mount Shasta (elev. 14,179 ft/(4,322 m)) near the center of the county, to lakes and dense forests, as well as desert, chaparral, and memorable waterfalls, the county is home to world-famous trout-fishing rivers and streams, such as the Sacramento and McCloud rivers. The county is dotted as well with lakes and reservoirs,[7] such as Castle Lake and Lake Siskiyou. Mount Shasta itself has a winter sports center. Pastoral Scott Valley in the western part of the county has many wide, tree-lined meadows, supporting large cattle ranches. The basins of northeastern Siskiyou County, including Butte Valley, Lower Klamath and Tule Lake basins, have some of the deepest and richest soils in the state, producing alfalfa, potatoes, horseradish, and brewing barley. Butte Valley nurseries are the leading source of premium strawberry plants in North America. Much of the county is densely forested with pine, fir, incense-cedar, oak, and madrone; Siskiyou County is also home to the rare Baker's Cypress Tree, Cupressus bakeri, which grows in only eleven scattered locations in the world, five of which are in Siskiyou County. The county's natural resources are most often used these days for skiing, snowboarding, hiking, mountain biking, camping, and wilderness recreation, as historic logging practices have been largely discontinued due to Federal and State environmental regulations. The county's water is viewed as sufficiently pure and abundant that the county is a source of significant amounts of bottled water, distributed throughout the country. A large Crystal Geyser plant is at the base of Mt. Shasta, near Weed.

Substantial amounts of the county are forested within the Siskiyou and Cascade Ranges, including significant oak woodland and . Siskiyou County is the northern extent of the range for California Buckeye,[8] a widespread California endemic. The Klamath National Forest occupies 1,700,000 acres (6,900 km2) of land which includes elements in Siskiyou County as well as Jackson County, Oregon.[9] 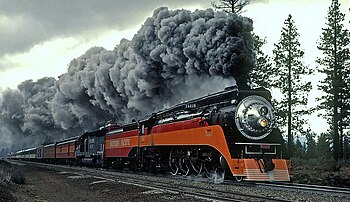 (STAGE) operates buses connecting the more populated areas of the county. Amtrak trains stop in Dunsmuir. Amtrak California motorcoaches operate from Sacramento and Medford, OR, with stops in Yreka, Weed, Mount Shasta, and Dunsmuir, for passengers connecting to and from Amtrak trains in Sacramento or Stockton.

Siskiyou is a strongly Republican county in Presidential and congressional elections. The last Democrat to win a majority in the county was Lyndon Johnson in 1964. However, Democrat Bill Clinton won a plurality of votes in 1992. Per the data provided, in 2020 Donald Trump set a record for most votes received by a presidential candidate in Siskyou County. This noteworthy achievement underscores the divide seen between the liberal/progressive urban powerhouses of California and their much more conservative rural counterparts.

On September 3, 2013, the Siskiyou County Board of Supervisors voted 4–1 in favor of secession from California to form a proposed state named Jefferson.[16][17] A similar move was made in 1941, but was shelved due to the attack on Pearl Harbor.[18] 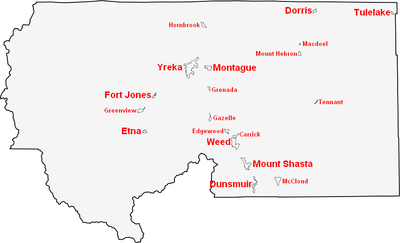 The population ranking of the following table is based on the 2010 census of Siskiyou County.[34]