More details
This information is believed to be accurate, but without any warranty.

Trinity County is a county in the northwestern part of the state of California. Trinity County is rugged, mountainous, heavily forested, and lies along the Trinity River within the Salmon and Klamath Mountains. It is also one of three counties in California with no incorporated cities.[4]

Weaverville has the distinction of housing some of California's oldest buildings. The courthouse, built in 1856, is the second oldest in the state, and the Weaverville Drug Store has been filling prescriptions since 1852. The Joss House is a historic Taoist temple built in 1873.

As of the 2010 census, the population was 13,786,[2] making it the fourth least-populous county in California. The county seat and largest community is Weaverville.[5]

The county takes its name from the Trinity River, named in 1845 by Major Pierson B. Reading, who was under the mistaken impression that the river emptied into Trinidad Bay. Trinity is the English translation of Trinidad.

Trinity County was one of the original counties of California, created in 1850 at the time of statehood. Parts of the county were given to Klamath County in 1852 and to Humboldt County in 1853.

The county hosts many visitors, especially during summer months, for camping, backpacking, boating on the lakes, rafting/kayaking on the rivers, hunting, and fishing. The summers tend to be clear, sunny, warm, and very dry, with little rain from June to September except for some mountain thunderstorms in the highest elevations. The winters tend to have copious precipitation, falling mostly as rain under 1000m/3300 ft in the valley bottoms, and mostly as snow over 1000m/3300 ft on the mountainsides. December, January, and February are the wettest.

There is an extensive wild river and stream system, and the terrain is quite rugged and forested, with the highest point at Mount Eddy, over 9,000 ft (2,700 m). The Klamath Mountains occupy the vast portion of the county.

Trinity was a Republican-leaning county in Presidential and congressional elections until recently; now it is a tossup. No Democrat had won the county since Jimmy Carter in 1976 until Barack Obama defeated John McCain by a 4% margin (50% to 46%) in 2008. In 2012, the county again voted Republican, but narrowly. Voter registration reflects this trend, with Democratic and Republican registration in a near dead heat (D: 2,710, R: 2,716). Third-party candidates tend to do rather well in Trinity County: George Wallace got over 13% of the county's vote in 1968, and it was the only California county carried by Ross Perot in 1992. It was also Perot's best performance in the state in 1996, although he didn't carry it again. John Anderson also did very well in 1980, as did third-party candidates in 2016.

In 2010, Trinity County voted against Proposition 19, which would have taxed and regulated marijuana. 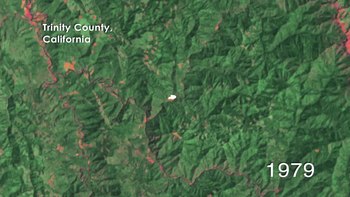 Play media
Timelapse of section of Trinity County, California, looking at evidence of clear-cut logging over the years 1972-1994. Data from Landsat satellites.

There were 5,587 households out of which 25.4% had children under the age of 18 living with them, 50.5% were married couples living together, 10.1% had a female householder with no husband present, and 35.1% were non-families. 29.5% of all households were made up of individuals and 11.1% had someone living alone who was 65 years of age or older. The average household size was 2.29 and the average family size was 2.80.

The population ranking of the following table is based on the 2010 census of Trinity County.[35]