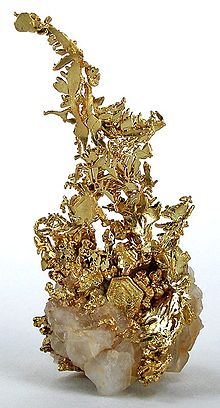 Very fine old crystalline-gold specimen, most likely from Tuolumne County. Sold in the 1950s for $65; more recently for $12,500. Published twice.[5]

listen)), officially the County of Tuolumne, is a county located in the U.S. state of California. As of the 2020 census, the population was 55,620.[6] The county seat and only incorporated city is Sonora.[7]

The northern half of Yosemite National Park is located in the eastern part of the county.

The name Tuolumne is of Native American origin and has been given different meanings, such as Many Stone Houses, The Land of Mountain Lions, and Straight Up Steep, the latter an interpretation of William Fuller, a native Chief.[8] Mariano Vallejo, in his report to the first California State Legislature, said that the word is "a corruption of the Native American word talmalamne which signifies 'cluster of stone wigwams.'"[9] The name may mean "people who dwell in stone houses," i.e., in caves.

One of California's original 27 counties, Tuolumne was organized in 1850.

Prior to the official naming of counties by the state, Tuolumne was sometimes referred to as Oro County.[citation needed] 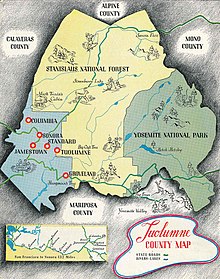 Special districts in Tuolumne County include:

Tuolumne County Transit bus routes radiate from Sonora to serve most of the county. In Columbia, a connection can be made to Calaveras County Transit. There is no public transportation into or out of Tuolumne County that connects to any of the closest metropolitan areas.

Columbia Airport and Pine Mountain Lake Airport are both general aviation airports located in the Southwest and Northeast corners of the county respectively.

The Government of Tuolumne County is established and defined by the California Constitution and is a five-member elected Board Of Supervisors who serve four year elected terms. The government provides services such as elections and voter registration, law enforcement, jails, vital records, property records, tax collection, public health, and social services. The Board is government for all unincorporated areas. Sonora is the only incorporated city in Tuolumne County.

Tuolumne county tends to vote Republican in Presidential and congressional elections. The last Democrat to win the county was Bill Clinton in 1992. In the 2008 presidential election, 14,988 votes were counted for John McCain with former president Barack Obama receiving 11,532 votes.[30]

The population ranking of the following table is based on the 2010 census of Tuolumne County.[33]

Discover new restaurants in Tuolumne County and add them to your bucket list!

Search homes and condos for Sale in Tuolumne County California. Try our MLS powered home search and get instant updates on new listings.

Read insights from locals, get news updates about Tuolumne County.

Join a discussion or ask a question about Tuolumne County.

Ask a Question
No results found.

Get updated on new job posts or post a position on the Tuolumne County Job Board.

Discover top school ratings and decide where to send your kids to school in Tuolumne County.

Get exclusive discounts from businesses for Tuolumne County Locals members.

15% Off Sitewide at Baker and Olive

Things to do in Tuolumne County

Discover new places and things to do in Tuolumne County.

Add a Business
No results found.

Connect with friends in Tuolumne County by joining a Local Group.

Start a Group
No results found.

Questions about this Community?
Ask the Local Experts