Largely urbanized in the areas nearer Downtown San Diego to the west[5] and characteristically hilly, with lower-density residential and semi-rural neighborhoods toward the east, it is economically and ethnically diverse.

In 1992, Councilman George Stevens campaigned against any official usage of the name "Southeast San Diego," since the designation had long been viewed as shorthand for the community as being crime-ridden and impoverished. His campaign was successful and all official use of "Southeast San Diego" has been discontinued by the city.[6] Many residents and locals however, still refer to the area as "Southeast." 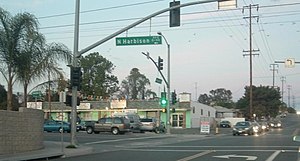 On the intersection of N Harbison Ave. and Division St., at the border of National City and Alta Vista

The areas southeast of downtown San Diego include portions of Council Districts 4, 8 and 9 (Encanto Neighborhoods, Skyline-Paradise Hills, and Southeastern respectively). A few neighborhoods in Central San Diego directly east of Downtown and south of the Martin Luther King Jr. Freeway have long been considered part of Southeast San Diego by locals, and are under the Southeastern Planning Area, including Sherman Heights, Logan Heights, Grant Hill, Memorial, and Stockton[7] Though Barrio Logan belongs to its own Community Planning Area, the neighborhood has historically been referred to officially as "Western Southeast San Diego" and is still widely considered as part of Southeast San Diego locally and politically.[8][9][10] 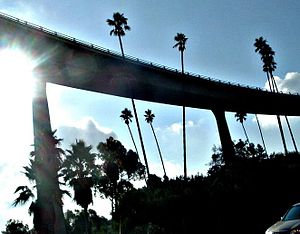 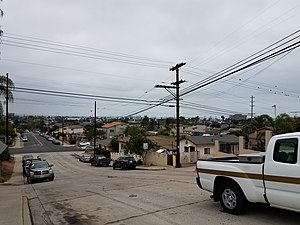 An image looking southward on 40th Street, Naval Base San Diego in the distance from the Shelltown neighborhood

Southeast San Diego is widely viewed as one of the most diverse areas in the city, inhabited most visibly by Latinos, African-Americans, and Filipinos. Estimates based on the neighborhoods spanning the 92102, 92113, 92114, and 92139 ZIP codes of Southeast San Diego put the population at roughly 195,000 people over an area of 21.2 square miles (55 km2), placing the area's population density at 9,285.7/sq mi (3,565.5/km²).[15][16][17][18] Throughout the area, virtually every neighborhood is predominantly BIPOC, with small concentrations of non-Hispanic Whites, though certain neighborhoods hold a majority or significant plurality of one racial and ethnic group over others. Southcrest, for example is 89.5% Latino.[19] In nearby Skyline, African-Americans make up 31.6% of the neighborhood's population, a much higher than average demographic make-up in comparison to other neighborhoods in the area. [20] Lastly, in Bay Terraces and bordering Paradise Hills, there is a significantly high Asian-Pacific Islander (predominantly Filipino) population of 44.3% and 32.9%, respectively. [21][22]

The area of Barrio Logan, for example, had been first settled by Mexicans arriving in the 1890s, followed soon after by refugees fleeing the violence of the Mexican Revolution and the poor Mexican economy between 1910 and 1920.[23] Barrio Logan is predominantly Latino and is home to Chicano Park. Though located near the City's Central core, it has long been considered part of Southeast San Diego, being directly Southeast of Downtown, and with previous historical records labeling it as part of "Western Southeast San Diego."[24]

Prior to "white flight" in the 1960s and early 1970s, many neighborhoods in Southeast San Diego were subject to discriminatory restrictive covenants, a problem faced by African-Americans like former Councilman and Deputy Mayor George Stevens, who was denied the opportunity to purchase a house in the Skyline Hills from a white realtor.[6] Presently, much of the Skyline Hills, as well as other Encanto neighborhoods such as Emerald Hills, Lincoln Park, Mountain View, O'Farrell, South Encanto, and Valencia Park, have a substantial African-American population. 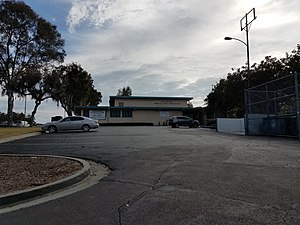 A recreation center in the Paradise Hills neighborhood

With the great influx of Filipino immigrants joining the United States Navy,[25] especially from the Vietnam War era on to the 1990s, many Filipinos inhabited the Southeast San Diego neighborhoods of Alta Vista, Bay Terraces, Paradise Hills, Shelltown, Skyline Hills, and Valencia Park, both for the relatively affordable housing prices and its close proximity to Naval Base San Diego.[26] During the 1980s, in the interest of urban renewal, an unused tract of land (formerly a canyon) between the Skyline and Paradise Hills neighborhoods underwent development. This tract would eventually become Bay Terraces. The notion of a new subdivision built directly triangulated in what were already considered high-crime areas repelled the great majority of home-buyers. The homes were also priced out of the range of typical residents of the area and most went unsold or, in some cases, unbuilt. Federal subsidies and economic programs were then employed to assist in completing and populating the subdivision. As a result, military personnel, Filipino immigrants with military ties, and low-income families were able to secure loans to buy the new homes in the area. The federally funded recovery project was only marginally successful, however, as several large portions of the development stood partially constructed and abandoned for nearly twenty years, the most noticeable example at the intersection of Skyline Dr. and Woodman Ave.[27]

Demographics from the remaining senior public high schools in the area, Samuel F. B. Morse High School in the Skyline neighborhood and Lincoln High School in Lincoln Park, provide unique snapshot samples of the area's diversity, especially around Free-Reduced Lunch eligibility, where roughly 80% (for Morse) and 85% (for Lincoln) of the respective student bodies were eligible, a figure that reflects the working-class nature of the area.[29][30]

Southeast San Diego had long struggled with an image problem plagued by street gangs, drug dealing, assaults, and homicide throughout its communities.[31] In 1992, Councilman George Stevens campaigned against any official designation of the area as "Southeast San Diego" since the name labeled the area in an entirely negative light.[6]

The San Diego Police Department's Southeastern Division includes some of the city's peak crime areas including the neighborhoods of Encanto, Paradise Hills, Lincoln Park, Chollas View, Skyline, Shelltown, and Southcrest.[31] Many of the inhabitants in these neighborhoods are working class or lower-income, and a typical sight that is evident throughout Southeast San Diego are homes outfitted with iron bars over the ground-floor windows and doors, and in many cases, cast-iron gates and chain-link fences guarding driveways, a reflection of the perceived need for security in these high-crime urban neighborhoods.[31] 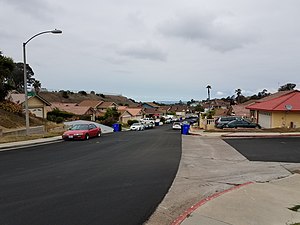 A neighborhood north of Bell Middle School in Paradise Hills

In Lincoln Park, the intersection of Euclid Ave and Imperial Ave has long been considered "The Four Corners of Death" due to the staggering number of deaths that have occurred in and around the area. Of the county’s estimated 88 gangs, at least 50 operate within a few square miles of this intersection.[42]

Sections of Bay Terraces recorded the greatest percentage increase in violent crimes during a five-year period reviewed by the San Diego Union-Tribune. The census block, from Paradise Valley Road to just south of Shadyglade Lane along South Meadowbrook Drive saw violent crime reports increase 450 percent. For the entire five-year period, there were 51 reported violent crimes, or about one every five weeks in just those few blocks alone.[43]

According to a study by Rand Corporation, homicides in Southeast San Diego share similar demographic characteristics with those in the Los Angeles Police Department's 77th Street Division (which serves South Central Los Angeles), though despite having 29 gangs appear in the San Diego Police Department's Southeast Division's murder files, only a handful of gangs appear responsible for the majority of gun violence that has occurred.[44]

In 2010, the Southeast San Diego neighborhoods of Logan Heights and Lincoln Park were featured on The History Channel's Gangland television series.[45][46] The show documented the Logan Heights Gang in the Season 6 episode titled "The Assassins," which first aired on February 19, 2010.[47] Less than three months later, the Lincoln Park Bloods were featured on the Season 7 episode titled, "Vendetta of Blood" which first aired on May 14, 2010.[48]

The rash of violence in Southeast San Diego had been met with community outrage over the years and prompted a series of anti-violence marches and rallies. In 2005, as a response to the spike in violence in the area, hundreds of middle school students took part in an anti-violence rally from the Lincoln Park area to Gompers Park in Chollas View, echoing chants of "Peace in Southeast" as they marched.[49] More recent efforts in 2020 to revitalize the area through the arts brought artists and activists to the intersection of Euclid Ave and Imperial Ave in Lincoln Park, in an attempt to reclaim the deadly street intersection long considered as "The Four Corners of Death," to "The Four Corners of Life."[50] 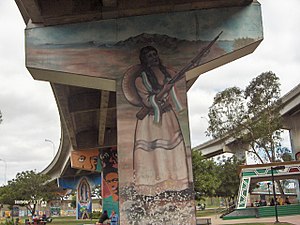 Murals along Ocean View Blvd near Interstate 15 in Mountain View

There are various landmarks, historical places, and other noteworthy locations in Southeast San Diego. Murals and dedicated public art areas are spread out across the community, the most notable of which are Chicano Park, a nearly 8 acre park of murals under the Coronado Bridge in Barrio Logan, and Writerz Blok, the first legal graffiti art park in the nation with over 10,000 sq. ft. of paintable walls in its half acre site, in Chollas View.[51][52] 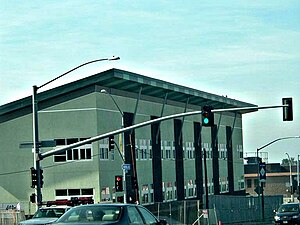 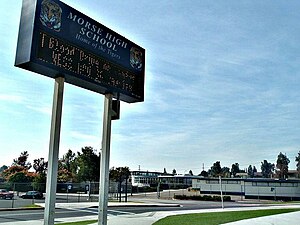 Samuel F. B. Morse High School in the Skyline Hills 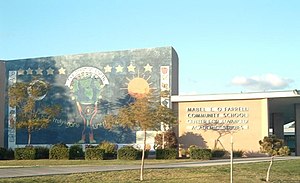 Southeast San Diego is served primarily by the San Diego Unified School District, along with some charter and private schools.

Based on surveys area principals conducted with parents, violence is a big part of the reason why 70 percent of southeastern San Diego families opt for charters or schools in other neighborhoods.[53]

Atypical and other charter schools

Reggie Bush, grew up in the Skyline Hills

Adam Jones, grew up in the Skyline Hills and graduated from Morse High School

Arnie Robinson, grew up in Paradise Hills and graduated from Morse High School

Nick Cannon, grew up in Grant Hill and Lincoln Park

Andra Day, grew up in Valencia Park and graduated from San Diego School of Creative and Performing Arts

Faizon Love, grew up in Emerald Hills and graduated from Morse High School 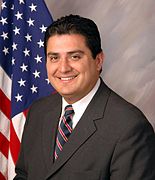 Southeast San Diego and its individual neighborhoods have appeared in various media, and has been referenced in many songs.