The first people to settle in Encinitas were the Kumeyaay. Gaspar de Portolá, governor of Baja California, visited the area in 1769 during the Portolá expedition[8] and met residents from the nearby Kumeyaay village of Jeyal[9] or Heyal, near the San Elijo Lagoon.[10] Portolá named the valley Los Encinos for the oak forest along El Camino Real, where there was also a village that was likely known as Hakutl in New Encinitas.[8][9]

After Mexican Independence, land was granted to Andrés Ybarra in 1842 to build Rancho Las Encinitas in what is now Olivenhain and New Encinitas, from which Encinitas got its namesake. Encinitas is a Spanish name meaning "little oaks".[11]

The city was incorporated by 69.3% of the voters in 1986 from the communities of historic Encinitas, New Encinitas (Village Park, etc.), Leucadia, Cardiff-by-the-Sea, and Olivenhain.[13][14] The communities retain their identities and distinctive flavors. 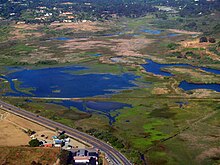 Encinitas lies on rugged coastal terrace. The city is bisected by a low-lying coastal ridge that separates New and Old Encinitas. In the north of the city, the coast rises in elevation and the land is raised up in the form of many coastal bluffs. These cliffs are subject to collapsing on the narrow beach.[15][16] The city is bounded by Batiquitos Lagoon to the north and San Elijo Lagoon to the south.

Encinitas can be divided into five areas:

Encinitas has a very mild, Mediterranean climate. Average daily high temperature is 72 °F (22 °C). Temperatures below 40 °F (4 °C) and above 85 °F (29 °C) are rare. Average rainfall is about 10 inches (250 mm) per year. The wet season lasts during the winter and spring, when temperatures are usually cool. Average daytime temperatures hit 65 °F in winter and spring, when rain and marine layer (fog) are common (May Gray/June Gloom). Nighttime lows range from 45 to 55 °F. The dry season lasts from summer through fall, with average daytime temperatures ranging from 75 to 85 °F, and nighttime lows being from the upper 50s–60s°F. Ocean water temperatures average 60 °F in winter, 64 °F in spring, 70 °F in summer, and 66 °F in fall. In winter, strong Pacific storms can bring heavy rain. During the winter of 2015–2016, the area saw rounds of severe thunderstorms.

Encinitas Ballet. Encinitas Ballet is a classical ballet studio in Encinitas. It was established in 2008 by Sayat Asatryan, former principal dancer of the Kremlin Ballet Theatre, and Olga Tchekachova, former soloist of the Mariinsky Ballet II.[citation needed]

In 2011 Mark Patterson and Robert Nichols illegally installed a 10 by 10 feet (3 m × 3 m) mosaic of a surfing Virgin de Guadalupe on the north concrete support wall of the train bridge on Encinitas Boulevard, leading to a battle over whether it should be removed or preserved. It was named "the Surfing Madonna" by the media and public.[31][32]

Museums and other points of interest 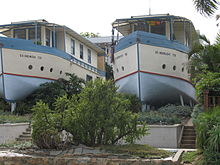 Built in the late 1920s, the boathouses are historic landmarks in Encinitas.

The Lux Art Institute, San Dieguito Heritage Museum, [33] and Encinitas Historical Society are located in Encinitas. Other points of interest include the San Diego Botanic Garden, Self-Realization Fellowship temple and Hermitage, as well as the gardens which are routinely open to the public, the historic La Paloma Theater, Moonlight Beach, and one of California's classic downtown areas along historic Coast Highway 101. Surfing is a popular activity in Encinitas, particularly at Swami's, which is rated in the top 5 surf locations in the world, and is mentioned in a verse of The Beach Boys' song "Surfin' U.S.A." A bronze statue "Humanity" was installed at J Street Overview in 2018. Sculptress is Maidy Morhous. Donors are Sue & Jay Vicory.[33] Manchester Reserve is great for nature walk and light hiking.

The Magic Carpet Ride, or more affectionately known by Encinitas locals as the Cardiff Kook, is a 16 ft bronze statue located in Cardiff-by-the-Sea, in the city of Encinitas. The San Diego Architectural Foundation, in its annual "Orchids & Onions" awards for the best and worst architecture of the year, awarded the Kook an Onion in 2007. The nickname comes from a derogatory surfer slang term for a "wannabe" surfer, as surfers in the area realized that the statue's form whilst "surfing" was far from correct. However, the Kook has become a local favorite in the city and has many wonderful traditions associated with it. At various times during the year, the Kook is "vandalized" and dressed up (wearing a lucha libre mask, being eaten by a paper-mache shark, wearing a full Uncle Sam costume for Independence Day, used by local high school students to ask each other to school dances) bringing local flair and tourists constantly to the statue.

Coaster trains stop at Encinitas station multiple times a day, 7 days a week with service from Oceanside to San Diego. Between 2013 and 2017, Amtrak's Pacific Surfliner also stopped here, but discontinued this stop due to low ridership.[35] 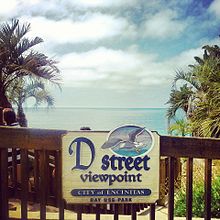 In elections held in November 2012, Encinitas voted yes on ballot measures to allow them to directly elect its mayor, with term lengths of two years, rather than the mayor being chosen by members of the city council, for one year terms. The first such direct election for mayor took place in 2014.

The city has been repeatedly sued over policies which are allegedly aimed at undermining state affordable housing laws.[36]

In the United States House of Representatives, Encinitas is in California's 49th congressional district, which has a Cook PVI of D +4[38] and is represented by Democrat Mike Levin.[39]

Why Buy and Live in Monterey County