Carmel By The Sea

This information is believed to be accurate, but without any warranty.

Monterey County, officially the County of Monterey, is a county located on the Pacific coast of the U.S. state of California. As of the 2010 census, the population was 415,057.[5] The county seat and largest city is Salinas.[6]

Monterey County comprises the Salinas, CA Metropolitan Statistical Area. It borders the Monterey Bay, from which it derives its name. The northern half of the bay is in Santa Cruz County. Monterey County is a member of the regional governmental agency, Association of Monterey Bay Area Governments.

The coastline, including Big Sur, State Route 1, and the 17 Mile Drive on the Monterey Peninsula, has made the county world-famous. The city of Monterey was the capital of California under Spanish and Mexican rule. The economy is primarily based upon tourism in the coastal regions and agriculture in the Salinas River valley. Most of the county's people live near the northern coast and Salinas Valley, while the southern coast and inland mountain regions are sparsely populated.

Monterey County was one of the original counties of California, created in 1850 at the time of statehood. Parts of the county were given to San Benito County in 1874. The area was originally populated by Ohlone, Salinan and Esselen tribes. 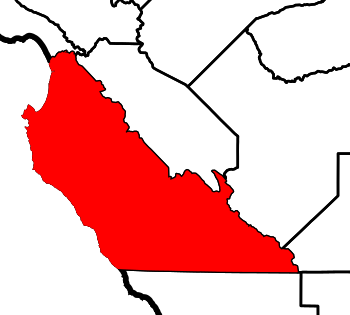 Counties and bodies of water adjacent to Monterey County, California

Monterey County has habitat to support the following endangered species: 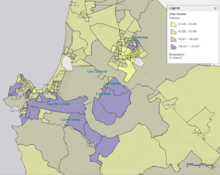 Median Household Income across the populated northern half of Monterey County, as of 2014.

Percent of affluent households (i.e. $150k annual income or higher) across census tracts in most populated area of the county.[10]

Generally, the western/southern parts of the Monterey Peninsula, Carmel Valley, Creekbridge (Salinas), and eastern parts of Prundale were the county's most affluent and educated (see dark blue on map). These areas had a median household income significantly above that of the California or the U.S. overall (typically above $95,000 vs. $60,000 for California and $52,000 for the U.S.)[11] and comprised roughly 8%-10% of neighborhoods (as defined by Census Block Groups).[12] Educational attainment was at least on part with, or above, state and national levels,[13] in these areas while the percentage of people living in poverty was typically a third or less than national and statewide average (with the exception of South Salinas).[14]

Social deprivation (poverty and low levels of educational attainment) was concentrated in the central and eastern parts of Salinas, and central areas of Monterey, Seaside, Marina, Soledad and King City. In central and eastern Salinas up to 46% of individuals lived below the poverty line and those without a secondary educations formed a plurality or majority of residents.[13][14] Overall, the Salinas metropolitan area, defined as coterminous with Monterey County, was among the least educated urban areas in the nation.

Roughly 8% of neighborhoods, as defined by Census Block Groups, had a median household income above $100,000 per year, about 60% above the national median. This coincided with the top 20 census block groups in the county listed below.[11][12]

About 4.5% of neighborhoods, as defined by Census Block Groups, had a median household income below $30,000 per year, about 60% below the national median. This coincided with the 10 poorest of the 20 lowest income neighborhoods listed in the table below.[11][12]

The Board conducts its meetings in the county seat, Salinas, and is a member of the regional governmental agency, the Association of Monterey Bay Area Governments.[30][31]

Supervisorial district boundaries are divided roughly equally according to population, using data from the most recent census.[32] In addition, any redistricting changes must comply with both California law as well as the federal Voting Rights Act.[32] Boundaries are adjusted decennially based on data reported by the United States Census Bureau for the most recent census.[32]

The 1st District is geographically the smallest supervisorial district in Monterey County and is entirely within the city limits of the city of Salinas.[29][33]

Luis Alejo represents the 1st District on the Board of Supervisors.[34] His current term expires in January 2021.

John Phillips is currently the Supervisor for the 2nd District.[36] His current term ends in January 2019.[29]

The 3rd District covers the majority of the Salinas Valley and southern Monterey County, extending to its border with San Luis Obispo County. The district includes the unincorporated communities of Spreckels, Chualar, and Jolon; the eastern portion of the city of Salinas; the cities of Gonzales, Greenfield, Soledad, and King City; the military installations at Fort Hunter Liggett and Camp Roberts; and portions of the Los Padres National Forest.[29][37]

The 4th District includes the southwest portion of the city of Salinas, the cities of Del Rey Oaks, Marina, Seaside, Sand City, and the former military installation at Fort Ord.[29][39]

The 5th District is geographically the largest of the five supervisorial districts, and covers most of the Monterey Peninsula and southern coastline of Monterey County down to the southern county border with San Luis Obispo County. The 5th District includes the cities of Carmel-by-the-Sea, Monterey, and Pacific Grove; the unincorporated communities of Carmel Valley, Big Sur, Pebble Beach, San Benancio, Corral de Tierra, and Jamesburg; military installations at the Presidio of Monterey, the Defense Language Institute, and the Naval Postgraduate School; and the Ventana Wilderness area of the Los Padres National Forest.[29][42][43]

The Monterey County Sheriff provides court protection, jail management, and coroner service for the entire county. It provides patrol and detective services for the unincorporated areas of the county. Incorporated municipalities within the county that have their own municipal police departments are: Monterey, Pacific Grove, Salinas, Castroville, King City, Marina, Seaside, Sand City, and Gonzales.

For most of the 20th century, Monterey County was a Republican stronghold in presidential elections. From 1900 until 1992, the only Democrats to carry the county were Woodrow Wilson, Franklin Roosevelt, and Lyndon Johnson. Since 1992, the county has become a Democratic stronghold in Presidential and congressional elections, with George H.W. Bush in 1988 being the last Republican to win Monterey County.

Monterey County is served by Amtrak trains and Greyhound Lines buses. Monterey-Salinas Transit provides transit service throughout most of Monterey County, with buses to Big Sur and King City as well as in Monterey, Salinas and Carmel. MST also runs service to San Jose, California in Santa Clara County

The population ranking of the following table is based on the 2010 census of Monterey County.[54]